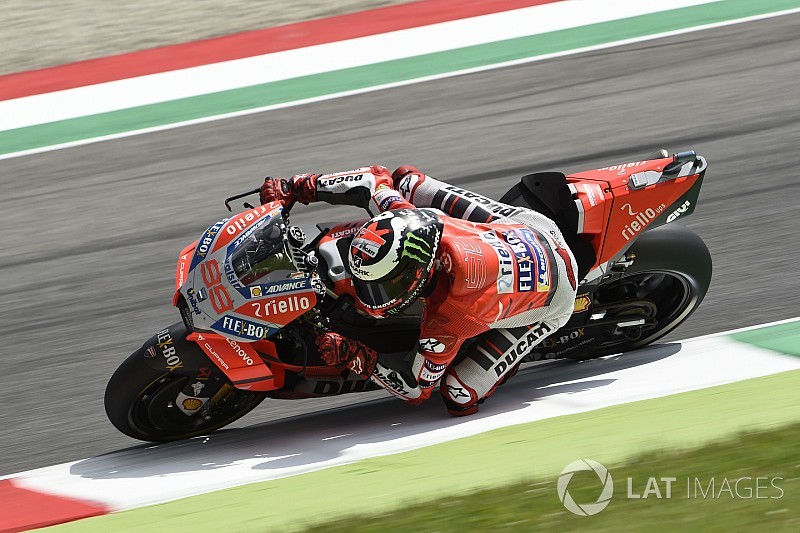 Ducati MotoGP rider Jorge Lorenzo says he has overcome the problems that resulted in him tumbling down the order in the previous round at Le Mans.

Lorenzo led the opening laps at the French Grand Prix, but couldn’t maintain his pace over the full distance and ended up sixth, despite crashes for victory contenders Andrea Dovizioso and Johann Zarco.

The three-time premier class champion explained that his struggles stemmed from lack of stamina, arising from a fuel tank design that wasn’t giving him enough physical support.

But, speaking after qualifying second at Mugello, Lorenzo said changes to the Desmosedici made since the Le Mans round two weeks ago have solved this problem.

“We pretty much solved this big problem that we have this year with the new bike, that creates a different ergonomy and I suffer more than the other riders,” he said.

“Some modifications finally arrived in the fuel tank that give me much more support. I can ride more comfortably and faster.”

Lorenzo missed out on a first Ducati pole by a mere 0.035 seconds to former teammate Valentino Rossi at the end of a frenetic qualifying shootout.

The Spaniard has led laps in the previous two races at Jerez and Le Mans, only to fade later in the race on both occasions, but is confident he can be more of a factor this time around.

“A pleasure to be again competitive and especially to feel better on the bike,” said Lorenzo, whose last front row start came at Aragon last year.

“This gives me confidence and maybe the energy to keep my pace for longer. So I think we are more prepared to fight for the race than other races.

“Just for a little bit [of time] I couldn’t get my first pole position for Ducati, which would have been amazing. But the important thing is the feeling, the confidence, and the saving of energy for this race.”