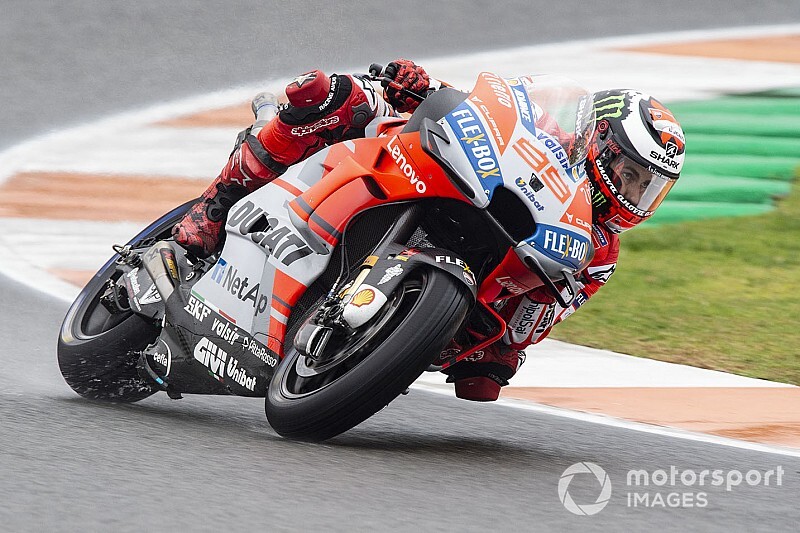 Jorge Lorenzo believes he could have challenged Marc Marquez for 2019 MotoGP title honours had he been retained by Ducati.

After a winless first season with the marque in 2017 and a similarly difficult opening to the following year's campaign, Ducati infamously decided to ditch the Spaniard in favour of Danilo Petrucci for 2019, right before Lorenzo took his first win for the squad at Mugello.

That sparked a strong run of form that lasted until the three-time MotoGP champion broke his ankle in a first-lap crash at Aragon, effectively curtailing his season.

Having signed to join Marquez at Honda for 2019, Lorenzo endured a miserable season and announced his retirement at the end of the year, albeit then signing a test rider deal for Yamaha and appearing aboard the M1 in Sepang pre-season testing.

Reflecting on his exit from Ducati, Lorenzo pinpointed the 2017 Misano race - where he led convincingly in the wet before crashing out - as a potential turning point.

"With Ducati, you know the story," Lorenzo told Sky Italia. "They had invested a lot in me, I had won three [premier-class] world championships and I was worth the financial effort.

“They came up with financial reasons, Petrucci would have cost less and he was Italian. Too bad, because there was no patience to wait and maybe everything was decided too soon.

"At that moment we found the thing that allowed us to win, but it was too late. In 2019 we could have fought for the championship."

Lorenzo said recently that while he has no interest in returning to racing full-time, he feels he "wouldn't be short of offers" to do so if he changed his mind.

However, speaking to Sky, Lorenzo conceded that he has yet to receive any approaches about coming out of retirement.

"I feel good physically, I might still be able to be a racer," he said. "But it's more of a mental thing, I'm in another phase of my life.

"I want to use more free time and when I work, I want to do other activities. There's very little chance I'm going to race again, it's 98 percent certain I won't. Also, nobody has called me."

Pramac Ducati would be open to Iannone reunion

Podcast: How Ducati is fighting the impact of coronavirus