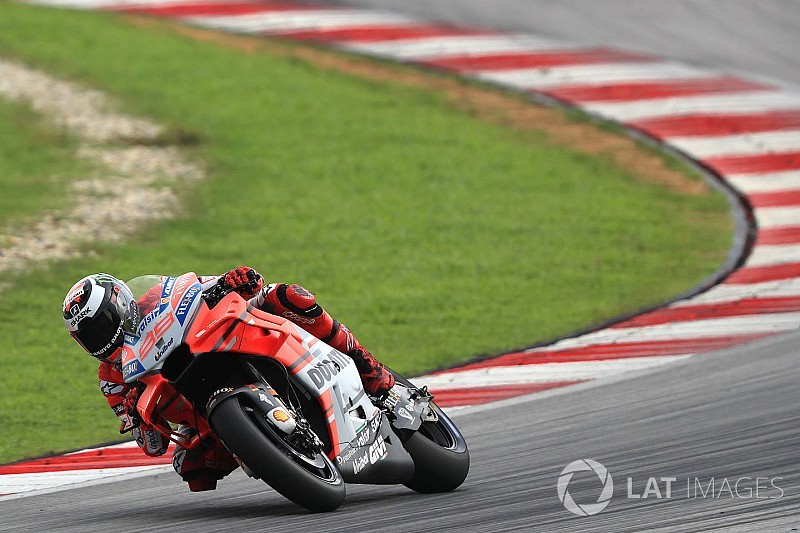 Lorenzo surpassed the previous best MotoGP time at Sepang, set by Honda's Marc Marquez during winter testing in 2015, by 0.037s.

The Maverick Vinales laptime that stood as the best effort from the opening two days did not remain the benchmark for long on Tuesday, bettered by a 1m59.186s from Lorenzo just half an hour into the session.

The Ducati rider was himself overhauled by Honda's Dani Pedrosa a couple of minutes later, but returned to the top spot after another hour.

Lorenzo's record-breaking 1m58.830s kept him top for the remaining six hours, as premier class riders wrapped up their test programmes by focusing on long runs.

Lorenzo's teammate Andrea Dovizioso was fourth, his day disrupted by a crash at Turn 1 early in the session.

Pramac privateer Jack Miller wrapped up his Tuesday running early, but still ended the day as the third Ducati in the top five, while Alex Rins wound up the top Suzuki, 0.002s behind the Aussie.

Reigning champion Marquez took seventh ahead of Yamaha's Valentino Rossi, who was among the few riders to improve in the closing minutes of the test. Rossi's teammate Vinales ended the day in 18th place.

Tech 3 Yamaha's Johann Zarco finished ninth despite an early tumble, while Pramac's Danilo Petrucci put Avintia Ducati newcomer Tito Rabat – who crashed twice during the day – out of the top 10 at the chequered flag.

With Pol Espargaro sitting out the day after his big crash on Monday, test rider Mika Kallio led the way for KTM instead, placing 16th.