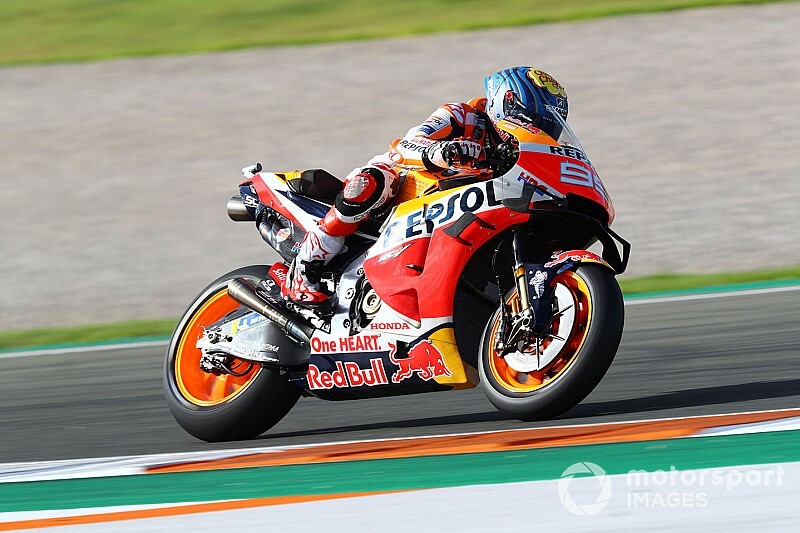 Lorenzo, who announced he would be retiring at the end of the season on Thursday following a bruising first season as a Honda rider, brought his bike home in 13th place in an attritional season finale.

Though his campaign had been a disaster, his Repsol Honda team sealed the teams' championship by overtaking Ducati in Valencia, having already won the manufacturers' crown and the riders' title through Marc Marquez.

Asked by Motorsport.com how he felt after taking the chequered flag for the last time in his MotoGP career, three-time champion Lorenzo said: "I'm totally happy. I feel a lot of happiness, I feel free. When I crossed the line, I felt freedom, because I'm exiting this sport healthy, still young, and with the possibility to enjoy life a lot.

"There's only one life, and if you have the chance to enjoy it, [you have to]. We have so many compromises, so many obligations, like I have now [as a MotoGP rider]."

Lorenzo has suffered with injuries for more or less the entirety of his final year as a MotoGP rider, and admitted that the cold conditions and the chaotic Moto3 race earlier on Sunday left him uneasy about the prospect of crashing in his farewell outing.

"Yesterday I imagined how I may feel during the grid procedure. I imagined that I would feel relaxed and with not so much pressure. But I felt kind of opposite.

"I was nervous, I got pressure, because I really wanted to not be in trouble in the start, in the first laps, because I saw in the other categories today the track was slippery, was difficult, the chance to crash and to make some mistakes was high.

"So, I didn't want to crash during the race. When I was in the lap three or four, I was a little bit more quiet and I knew I could finish the race, but even [after] that this medium front tyre was a little bit on the limit and I needed to not lose the focus because if I was slowing too much, the front could cool down and I could crash easily.

"So when I saw I couldn't follow Tito [Rabat], who overtook me, or the front group, my position was this one, with the bad feeling, I decided to press the survival button, survival mode.

"Just finish the race at my limit, finish that race on the bike to enjoy this unforgettable day with my fans, with my fan club, with all the fans that came today and made this track so crowded."