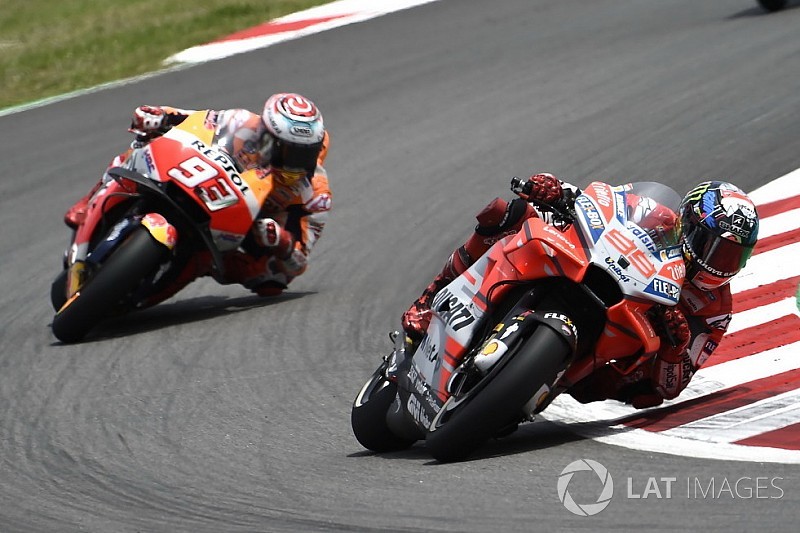 Ducati rider Jorge Lorenzo says he has “nothing to lose” in chasing MotoGP's runaway championship leader Marc Marquez, who Lorenzo says will be under “a little bit of pressure”.

Lorenzo recovered from an abysmal start to his 2018 season with back-to-back wins at Mugello and Barcelona, but remains 49 points adrift of Marquez, with seven races completed out of 19.

A 49-point championship comeback would be unprecedented for the current MotoGP points system, which was introduced in 1993 – with its biggest turnaround being Marquez's recovery from a 37-point deficit after six races last year.

“Before Mugello was almost impossible, now it's possible even if it's very, very difficult. But we have our chance.”

Mugello and Barcelona are two tracks that have traditionally favoured Lorenzo, and the Spaniard he was wary of dropping points to Marquez at Assen – a track where Lorenzo has had only one podium since 2011.

“Honestly, this championship that change so much, I also can lose a lot of points in a difficult race," he admitted. "Assen for example is a track that for the moment, has been a lot of years that I don't get a good result, last year was not very good.

“But honestly our bike now is very competitive, I feel great, and probably we have the more complete Ducati ever. So that's also a good signal, let's see.

“The good thing for us is that we don't have pressure. We don't have nothing to lose. Marc have a little bit of pressure in that aspect, no?”

Factory teammate Andrea Dovizioso had entered the season among the favourites to take the fight to Marquez, and won the opener in Qatar – but a run of three retirements in four races has left him level on points with Lorenzo.

Like Lorenzo, the Italian admits his title hopes aren't looking good if you consider them “objectively” but believes modern MotoGP is unpredictable enough to allow for the possibility of a comeback.

“If you are objective in this moment, 49 points [to Marquez], a lot of riders in front of me, Marc is very consistent, he's fast everywhere – no, [it's not possible],” he said.

“But I don't think is the reality. Because in every race everything can happen. You know, because it's easy to make a mistake, everybody is on the limit, the weather can create every situation.

“And all the strongest riders, all the fastest riders on top of the championship are crazy, so can create a lot of strange situation.

“About that, there is not a question mark. The reality is difficult - but there is a lot of points [left].”