Jorge Lorenzo is confident that Honda will still take his input into account when developing its bike for the 2020 MotoGP season, despite recent friction between team and rider.

Following a disastrous start to the season, Lorenzo flew to Honda's headquarters in Japan after Mugello in order to make a breakthrough with the bike.

But he was then ruled out of action for four races after crashing at Assen, and reached out to Ducati, as well as Petronas Yamaha, in an attempt to leave his current team.

In the end, Lorenzo ended up committing to Honda for 2020 and returned to racing at Silverstone - although he hasn't been able to finish higher than 14th in past three races.

Honda made a clear step forward in terms of engine power in 2019, and Marc Marquez has been dominating the season, finishing second or higher in every race bar one.

But Lorenzo reckons that the engine improvement made the bike worse in other areas such as cornering, and he is confident that Honda is working on these aspects for 2020.

"Everything that was worked on in Japan [in June, after Mugello] is still in place for next year's bike," said Lorenzo. "I think they're working on it, but until I try that bike we won't know.

"I spoke with Takeo [Yokoyama, technical director]. It’s clear that to gain more power, we got some problems in the corners with the new bike.

"So Marc is able to take benefit of this power without losing too much in the corners.

"But as I try the new bike in Jerez [last November in post-season testing], I saw that something was missing in the corners. I tell the engineers, but maybe it was too late to find a solution. We need to race with this.

"For sure Honda now is working, obviously to keep the power that they have, it’s a big advantage compared to last year’s bike, but to solve the problem that has generated these problems for next year."

Lorenzo added that Honda favours the input from Marquez, the only man able to take advantage of this year's RC213V, but reckons that's "normal".

"It’s also true that the bike, from the time Marc arrived in MotoGP, follow a way of the fastest rider in the team, that was Marc," said Lorenzo.

"Marc has, as you know, a very special riding style, very aggressive riding style and the bike needed that to be able to do better for Marc.

"The bike offers this feeling for the rider. For a smooth rider, for safety in the front, they need to ride similar to Marc to be able to take the maximum. But obviously Honda will follow a little bit the way of the fastest rider, this is normal.

"But also Honda, as a big factory, has the potential to satisfy a little bit all the riders – not in all riders, but a little bit. So let’s go for that next year." 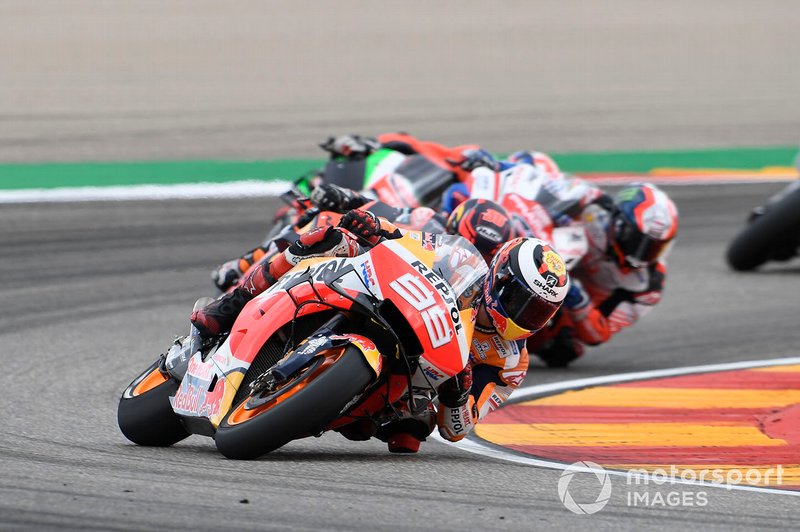