© 2021 Motorsport Network. All rights reserved.
TV Tickets fashion Giorgio Piola jobs
Previous / Rossi: My Italian GP "one of the worst for a long time" Next / Petrucci will now "do everything" to aid Dovizioso title bid
MotoGP / Italian GP Breaking news

Jorge Lorenzo is travelling to Japan on Monday in a bid to improve his feeling on Honda’s MotoGP bike after another disappointing result at Mugello.

Three-time premier class champion Lorenzo’s troubled 2019 campaign continued in the Italian Grand Prix, the scene of his first victory as a Ducati rider 12 months ago.

This time around, Lorenzo could only manage 13th place aboard the Honda, two places lower than the result he achieved in the previous race at Le Mans, while he also finished five seconds further away from the winner than he did in France.

Lorenzo revealed that he will be making the trip to Honda’s Asakadai factory to work on finding a more comfortable positioning on the RC213V, an area where he feels there are still substantial gains to be made.

“I really believe we can make quite a big improvement in that area,” he said. “The solution for us was going to Japan, to spend some days there.

“I knew before the race it would be difficult because the feelings, how I feel on the bike, because of the heat and the position I started [17th].

“The position and distance [to the race winner] to the winner was [worse] than Le Mans, but we expected that before the race.

“Hopefully step-by-step we can get closer and improve the result from Le Mans. This is my goal, this why I don’t go home but I go to work hard at the factory.”

Six races into his tenure as a Honda rider, Lorenzo lies 14th in the championship on 19 points, almost 100 fewer than Marc Marquez has accrued so far this year.

Lorenzo said after qualifying that Marquez’s strong form makes it hard for him to demand substantial changes, but said post-race he believes HRC has the capacity to make a bike that is more “complete” for its other riders.

“It’s clear we have a very strong engine at this moment, but this brings another problem in other areas, [it makes the bike] difficult to ride in my opinion,” Lorenzo said.

“Marc has been very fast, winning a lot of races with this bike, so the most logical thing is that they keep [following] the way of Marc.

“But also I believe if any factory can make a Plan B, it’s Honda.”

He added: “Let’s see if we can work together not only the ergonomy but also in other things to make the bike even more complete than now.

“For now the bike is enough complete for Marc to improve the results of previous years, but for the other riders it’s more difficult.” 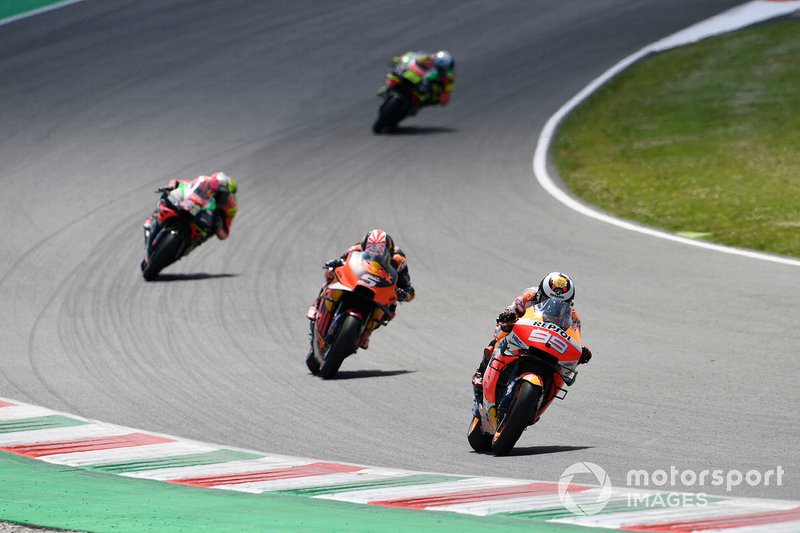 Rossi: My Italian GP "one of the worst for a long time"

Petrucci will now "do everything" to aid Dovizioso title bid