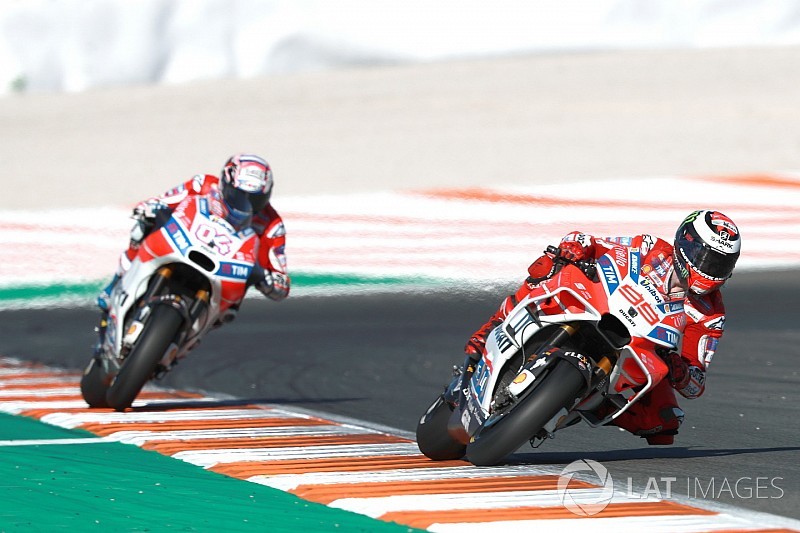 Jorge Lorenzo insists his refusal to heed a Ducati team instruction to move aside for Andrea Dovizioso during MotoGP’s Valencia season finale was aimed at helping the Italian.

In a race that Dovizioso had to win in order to stand any chance of denying Marc Marquez the title, Lorenzo and Dovizioso ran in formation in fourth and fifth places for the majority of the race.

However, after a number of laps where it appeared Dovizioso was being slowed by his teammate, Lorenzo was issued a coded instruction – Suggested Mapping 8 – to move aside, followed by a pitboard showing ‘-1’.

Lorenzo was still running ahead of Dovizioso when he crashed out of third place with six laps to go, and Ducati’s title hopes ended the same lap when Dovizioso likewise fell.

Dovizioso said post-race that Lorenzo hadn’t been holding him up, as he felt both he and his teammate were having to push “over the limit” to keep pace with Marquez and the leading group.

Giving his take on events, Lorenzo acknowledged that he ignored Ducati’s instruction because he felt Dovizioso’s chances would be boosted by having him directly ahead.

“Even looking at this [dashboard] suggestion, I keep pushing until the end, because I knew it was the best thing for me, for Ducati and for Dovi,” said Lorenzo.

“I helped him to improve his pace by one or two tenths, to be as close as possible to the first group. My intention was, and it was the case, that we arrive at the first group.

“If he had the option to win, I would have gone wide and let him pass. But unfortunately it was not like that.

“Maybe in some corners Dovi was close and I slow down a little bit his pace, but in general terms, having my wheel in front of him made him improve slightly his pace. I helped him stayed closer to the front group.

“I knew Dovi was struggling, I knew his pace during all the weekend, and I knew he was making the best pace of the weekend just in the race. It was [because of the] help from my wheel.

“I’m happy because I was not wrong. If I was wrong and slowing him, I would be very sorry. But it’s not like that, my feeling was true.”

Lorenzo also revealed that, unlike in Sepang, he didn’t discuss tactics with Dovizioso or Ducati technical boss Gigi Dall’Igna before the Valencia race.

Asked if he feared his decision could be taken the wrong way by fans, he replied: “No. Firstly I’m a person who doesn’t care what other people think, because I do what I think is right.

“It’s already difficult for the team to understand what riders are feeling; imagine for the people who are not in this business… it’s 10 times more difficult [for them to understand].”