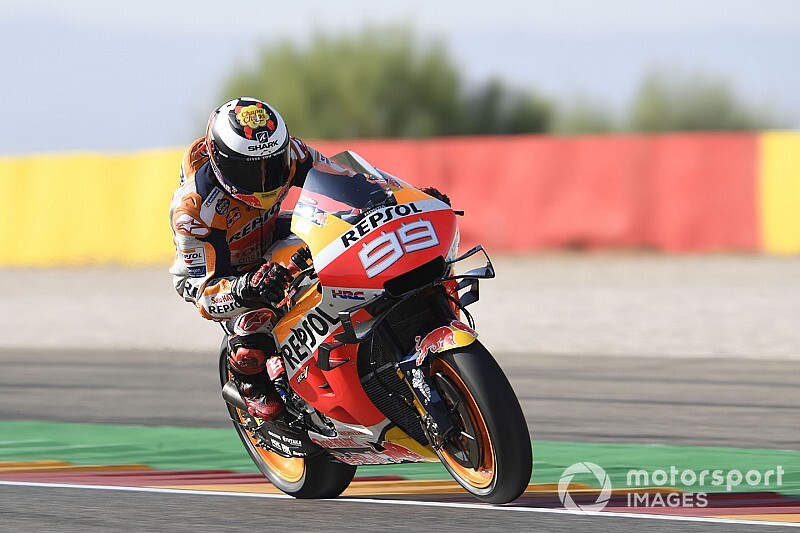 Jorge Lorenzo admits that his physical condition is not the main reason he lagged so far off the pace during the opening day of practice for MotoGP's Aragon Grand Prix.

Repsol Honda rider Lorenzo endured another dismal day as he kicked off his third race weekend back from injury at the Spanish circuit, ending up 20th-fastest in second practice.

The three-time premier class champion had propped up the order in the opening session, some four seconds off the pace of teammate Marc Marquez, and while he improved by 1.4s in FP2, he was still nearly three seconds shy of Marquez's benchmark.

Last week at Misano, Lorenzo was within 1.3s of the pace at Misano on Friday and went on to finish the race - won by Marquez - in 14th place.

The Spaniard said his physical condition had improved since the last race and that his feeling aboard the Honda was the main cause for his lack of speed.

"I am better, I just feel a little pain in the back in the neck on the bike," said Lorenzo. "It was not the main issue today, it was very difficult in the beginning to be competitive.

"I struggled a little more than Misano on the first day. In the morning I put so much difference [in time] with the fastest one. In the afternoon we making more short the difference [to the fastest], but still very far and the pace is not fantastic.

"It is complicated because tomorrow it is going to rain, we don't have so much chance to improve the bike. We are very far."

Asked if the two vertebrae that were fractured had healed, Lorenzo said yes, and clarified the pain was in the surrounding area.

He added: "The pain is getting less every time but the problem is that if I keep riding, the effort that I do on the bike make the pain go back.

"It's taking a lot of time, much more than I expected, but I feel better."

Lorenzo said he was suffering in all aspects aboard his RC213V bike at Aragon, where he had set himself the modest target of finishing within 30 seconds of the race winner.

"[Fitness] was not the main problem today but the feeling on the bike was not good: braking, entering the corners, acceleration," he said. "That was why I was very slow.

"My physical condition is not as before because I couldn't train very hard, but this doesn't [stop] me to do one fast lap. It is more the lack of confidence that I don't feel very good."