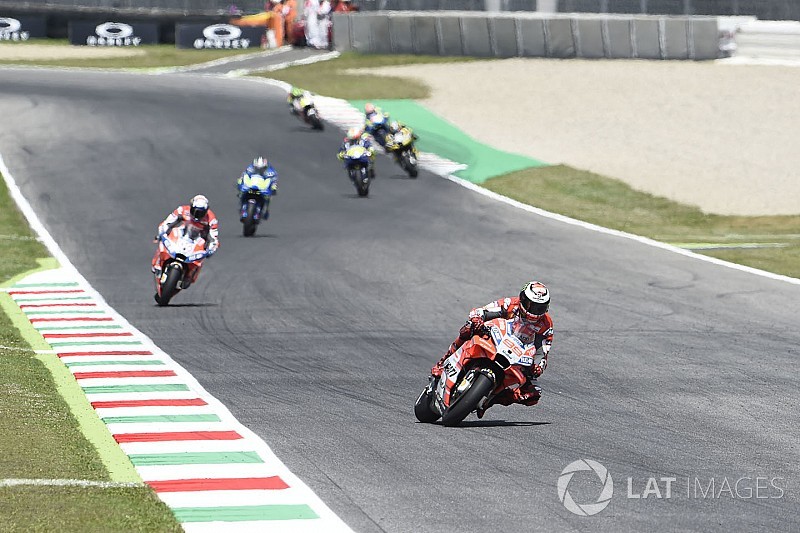 Jorge Lorenzo says he had to “completely change” his riding style throughout the Mugello MotoGP weekend to secure his first victory with Ducati.

Lorenzo, who joined the Italian manufacturer back in 2017, took until his 24th start with Ducati to score his first win with the Desmosedici bike, dominating the Italian Grand Prix.

The three-time world champion attributed his breakthrough to the updates Ducati brought to Jerez and a fuel tank tweak made for Mugello – but also said the win required a different way of riding.

“I feel better than ever with this bike - physically I have more energy to keep a more constant pace during more laps with this modification of the fuel tank,” Lorenzo said.

“But I was very worried about the front tyre. Because maybe some [rival] bikes destroy less the front tyre, and this should be an advantage for them.

“So I just changed completely my riding style, to save this front tyre - probably I did the biggest change of riding style from the practice to the race, of all my life.

“And this works a lot, because after the race I look at the front tyre and [it] was much better than I expected.

“I used the mind, I was really focused, no mistakes, and I could have the energy, enough energy to keep pushing till the last lap.”

Lorenzo ran the medium front in the 23-lap race – and took the chequered flag more than six seconds ahead of runner-up Andrea Dovizioso and third-placed Valentino Rossi, who both used the hard front.

“Here, we got some problems of graining, but I think everyone, for the characteristic of the asphalt or the track," added Lorenzo.

“So I just change the way I ride in the right corners, but I cannot explain [to] you so much more.”

Many riders experienced severe tyre drop-off at Mugello, and despite lapping in the 1m48s bracket for all but the three final laps, Lorenzo said he was no different.

“Obviously the track was very bad, was very slippery after the Moto2 race. And everyone was having problems.

“The trick today was this. I change completely my riding style on the race, and this works.”