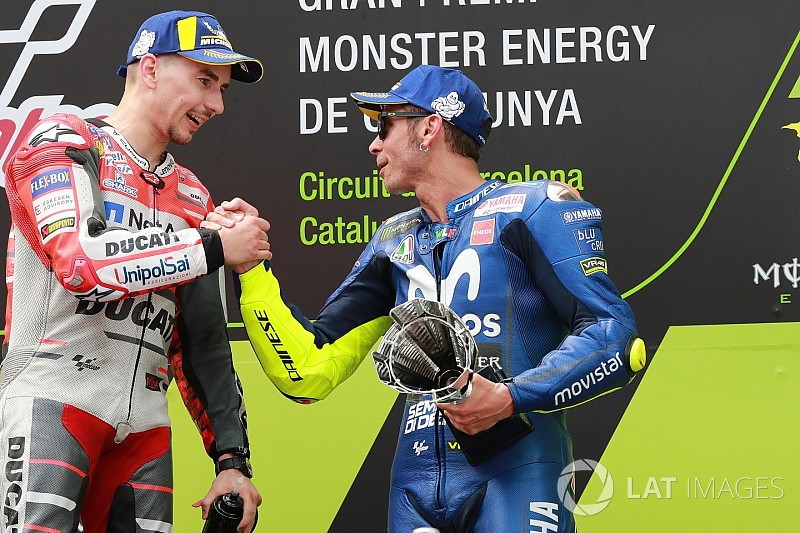 Jorge Lorenzo believes MotoGP rival Valentino Rossi had a “more complicated” bike in his time at Ducati and would've fared better on the current GP18.

Lorenzo emulated Rossi in switching from Yamaha to Ducati for 2017, and his move looked set to be a similarly ill-fated affair as he struggled to get to grips with the Desmosedici bike.

But while Rossi ended his 2011-2012 Ducati stint winless, Lorenzo has pulled off a remarkable turnaround, having now won two races on the trot – although this already came after he and Ducati decided to go their separate ways in 2019.

Following Lorenzo's second Desmosedici triumph in Barcelona, he and fellow podium finisher Rossi were both asked whether the Italian would've also won races on the current GP18 bike.

“I don't know, it's a difficult question,” Rossi said. “I think nobody know and we will never know. The question will remain open.”

Lorenzo, however, was more assured in his answer: “I think Vale's Ducati was more complicated. From the outside I believe that.

“Now for me is the more complete Ducati ever. Vale is a great rider, so why not?”

He then joked “sorry, great rider, no - a champion” in reference to the comments made by Ducati CEO Claudio Domenicali late last month.

Lorenzo's praise for Rossi is the latest in a string of recent comments and conversations that have suggested a more cordial relationship between the former teammates, who famously feuded – often out in the open – during their time at Yamaha.

Asked whether he and Rossi were friends now that they no longer shared the Yamaha garage, Lorenzo said: “I don't think we are friends, even if I think outside of the track we will have fun, because we like to have fun outside the grand prix.

“It is difficult to be friends with a rival. A rival, two strong characters, two riders that want to win.

“But you know, the most important thing is to have respect, and I have huge respect for Vale, and I think he has the same to me. We are great champions, we are one of the best in history.”

Rossi expressed a similar sentiment: “We had difficult times, but also good times. A little bit of up and down, one or two [conflicts] quite deep.

“But it's like this, difficult when you fight for the same results and Jorge is also one of my strongest and toughest rivals in my career.

“We stay long time together in the same team, which means it was also more difficult. The important is the respect, for sure.”

MotoGP grid likely to shrink in 2019