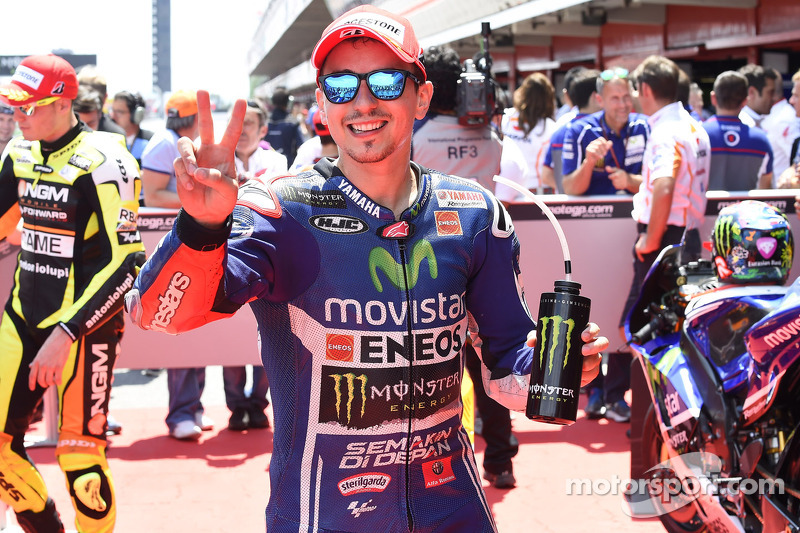 Tomorrow Jorge Lorenzo and Valentino Rossi will be aiming to make a good start and produce positive results for the seventh Grand Prix of the season.

Teammate Valentino Rossi left it to the last lap to make his move, securing fifth on the second row of the grid.

In a reversal of normal practice Lorenzo was the last to leave the pits for the 15 minute qualifying heat, allowing the MotoGP pack to move on before hitting an empty race track. He moved straight into third with his first flying lap, a 1’41.463. He was unable to beat the time on his first tyre, returning to the pits with just under seven minutes remaining for fresh rubber. With just five minutes left on the clock he was back on track, ready to attack again as a late lap by rival Stefan Bradl dropped him to fourth. The local hero delivered a perfect lap with just over a minute remaining, delivering a flying 1’41.100 second lap to snatch second on the grid, just 0.115 seconds behind Dani Pedrosa on pole. 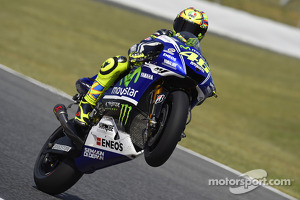 Rossi kept the tension high to the last moments of the qualifying heat, leaving the pits late like his teammate, he took tenth on his first flying lap with a 1’42.076 but unable to climb any higher on his first tyre. A pit stop with seven minutes remaining offered a fresh rear tyre and another chance to step up. As the clocked tick it took until the last minute for a clear run and a good lap, the nine-time world champion shooting five places up the timesheets with a 1’41.290 to take fifth for a second row start, 0.506 from pole.

Monster Yamaha Tech3 Team rider Bradley Smith again displayed fast times during Q2 session. The 23 year old Britain was fast from the start of in the 15 minute qualification session, despite experienced some small balance issues. At the end of the session Smith rode his best lap of 1.41,491, allowing him to clinch 8th on the grid, while Pol Espargaro best lap of 1.41,677 will have him start his home Grand Prix from the 10th position. Tomorrow both riders will be aiming to make a good start and produce positive results for the seventh Grand Prix of the season.

NGM Forward Racing rider Aleix Espargaro continues his good momentum. The local rider repeated his strong performance from yesterday in today’s qualifying session, setting the sixth fastest time of 1’41.308. Teammate Colin Edwards had a tougher outing. His best time was a 1’43.226, which means he will start tomorrow’s race from 17th place.

Jorge Lorenzo (2nd / 1’41.100): “I made a very good lap, I risked a lot, especially in the braking to make it. Finally we made a good setting for this track, it’s hard because with the track and temperatures it’s hard to make the bike stable. Tomorrow we will try to make it even more stable. We hope to remain consistent and strong like in Mugello to fight for the win again. We all hope it doesn't rain because a wet race would be difficult to judge. It would be great to win, everyone wants to!”

Valentino Rossi (5th / 1’41.290): “I’m quite satisfied with this afternoon’s result because the target was to stay in the top 5 and I am there at last. For sure the front row is always better and makes things easier but the three Spanish guys in front have showed to be very strong. They have a great pace whilst mine is not at their same level at the moment. Later today and tomorrow morning we’ll try hard to improve the bike and stay with them, hopefully closer than we are today. As for the tyres for the race, I guess everybody is going to use the medium rear tyre, while the choice for the front is still open and will depend on tomorrow’s temperature and weather conditions.”

Massimo Meregalli - Movistar Yamaha MotoGP Team Director: “We have improved every session and that makes us happy with today’s result. Second and fifth place make us confident for tomorrow’s race. We still have to slightly improve the race pace, although Jorge’s job this afternoon was very good. The weather forecast for tomorrow says that temperatures might be a little lower, which is good for our M1’s. It’s going to be a hard-fought race, especially with the first three riders who showed to have the best race pace but I expect Valentino to be the outsider and be part of the game until the very end. We still have half day to find something to test tomorrow morning in the warm-up. I am sure at 2pm we will be ready to get the best possible results.”

Bradley Smith (8th / 1'41.491): “Although I'm not where I want to be and a little frustrated I still feel positive for the race tomorrow. We tried a few different settings on the bike in which some worked better than others and I consistently went faster in every session which of course is a big positive. This was despite the fact that in the end it wasn't quite enough to get to the front. I wasn't too confident with the turning of the bike and it felt like I had my elbows buried in the ground! This is something we will look to work on tomorrow morning during the warm up. In the race I aim to get a good start then push as much as possible especially during the first laps, so that I can try to follow the leading pack for as long as possible.”

Pol Espagaro (10th / 1'41.677): “I can't be satisfied with our qualifying performance today. We struggled the whole weekend in one sector of the track, where we are losing more time than in the rest of the lap and unfortunately we cant find a solution yet. But when I was behind Jorge during the last minutes of the session I tried to follow his line and we will check the data now to compare what might be best compromise. Of course starting from the 10th position will not make things easy for tomorrow but I will try to get a good start and keep my head down to offer a good show for my fans.”

Aleix Espargaro (6th / 1’41.308): “I’m very happy with today’s result. The feeling with the bike improved a lot and I have a good pace. To start from the second row, just 0.323 from Dani and very close to Valentino and Jorge is good and tomorrow I will do my best to get a great result in front of my home crowd. We worked a lot on the electronics, solving some problems we had yesterday and in the last races. I want to thank my team and Magneti Marelli for their great support.”

Marquez clinches scintillating seventh win of the year in Catalunya