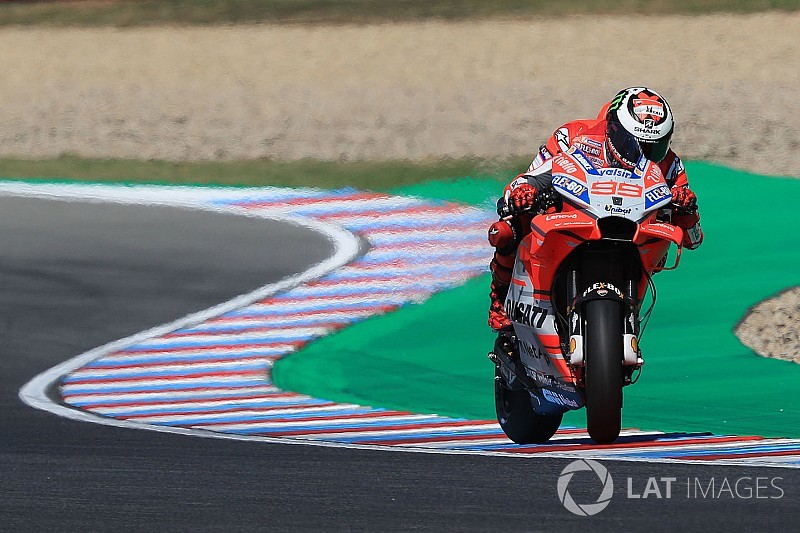 Lorenzo finished outside the top 10 in both FP1 and FP2, while Ducati stablemates Danilo Petrucci and Andrea Dovizioso ended the day second and fifth respectively in the combined order.

Not only did Lorenzo finish behind his two fellow GP18 users, he was also slower than the three GP17s of Alvaro Bautista, Jack Miller and Tito Rabat.

Lorenzo admitted that the day was more difficult than expected, and that he will try a vastly different set-up on Saturday.

"Today honestly has been a difficult day," he said. "We've been less competitive than we expected because we expected here to have less troubles than Sachsenring, for example, but we got even more for the moment.

"We come back a little bit to the setting of Mugello and Montmelo [Barcelona], because in the last two races we try to change the weight of the bike, to put more front weight.

"Finally was a mistake, because at the end of the race I lose so much grip on the rear, so now will come back a little bit to Mugello and Montmelo setting.

"For this track looks like we need to modify completely, or to try a completely different setting, a radical setting tomorrow, to understand which is the way that we need to follow.

"Now we are quite far from the top guys. Maybe not the 15th position, because I didn't put new tyre at the end like the rest of the riders, but neither [am I with] the top three."

When asked what are the issues, Lorenzo said he is struggling in several areas, and that he can't ride the way he did in the past few races.

"[I'm missing] almost everything," he said, "because usually in the last races I brake very hard, very late.

"Now I'm not braking quite late, and I don't have high corner speed, I'm not finding good traction, I'm losing almost everywhere. So in general I need more grip, in the front and especially in the rear."

Marquez: Dovizioso is the rider to beat at Brno