Lorenzo admits he rode "too excited" before four-bike crash

Jorge Lorenzo took the blame for crashing Maverick Vinales, Valentino Rossi and Andrea Dovizioso out in MotoGP's Spanish GP, saying he was "too excited" after having a strong start to the race. 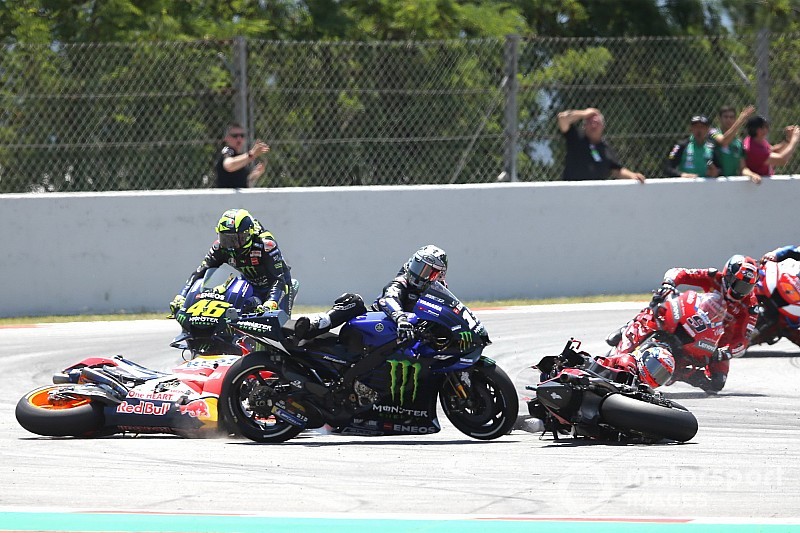 Yet to finish a race in the top 10 this year, Lorenzo had a strong start in Barcelona and was running fourth behind Vinales on lap two.

But an overtaking attempt at the tight Turn 10 left-hander saw him hit Dovizioso and Vinales, with Rossi also caught up in the incident.

Vinales criticised Lorenzo for making a move at such a risky place while he could have just overtaken him on the main straight, and the Honda rider agreed that he'd been "too excited" following his strong start.

"I make a good start, recover a lot of positions, I feel very good on the bike, better than the warm-up, better than on the weekend and I was recovering a lot on braking," said Lorenzo.

"In the previous acceleration, Maverick with Marc for not hit him he needs to close [the throttle], so I take the advantage of this, take his slipstream and prepare an overtake because I feel I have something more the first two-three laps and I could recover some more positions.

"But probably I try to overtake Maverick in the wrong moment in the wrong place. I knew this was a tricky corner, like first corner of Austin very similar, and I saw many crashes like this in all the categories, happened to me in 2016 with [Andrea] Iannone.

"Probably I was too excited, knowing that I was feeling good and I just felt that I could go faster and faster. My opinion is that these hairpins, creates these crashes and we saw many times.

"We just need to understand that as more as possible, probably today I didn't realise, remember or pay attention to that that especially in the first corners [laps] it is better to be a bit more cautious in these corners. It was my mistake.

However, Lorenzo added that he didn't do anything "crazy", and that the crash wouldn't have happened if there weren't so many riders around him.

"I didn't make any crazy braking, just I was more or less in the side of Maverick then I brake quite normal.

"The problem was that we were too many riders and in the front was Dovi that prepares very well the exit of the corner, opening the line so I was getting closer and closer to Dovi - and for not hitting him I needed to brake more with the front brake and the front tyre close.

"I think the same moment in another corner didn't happen, also if I wouldn't try this overtaking at that moment, wouldn't happen. Was a combination of factors."

Vinales called for Lorenzo to be relegated to the back of the grid in the next race at Assen, and Lorenzo accepted his compatriot's opinion.

"I understand Maverick's reaction because in the past happen to me and I have similar reactions to him, I understand completely his reaction and I say nothing.

"Obviously I am grateful for hearing what Valentino say because he says more or less the thing I say. Dovi, I spoke with him and he takes my apologies quite correctly.

"I had bad reactions or hot reactions in the past when happening to me. This is racing, I try to learn the lesson for these type of corners in the future, I cannot change the past, I am sorry for them."