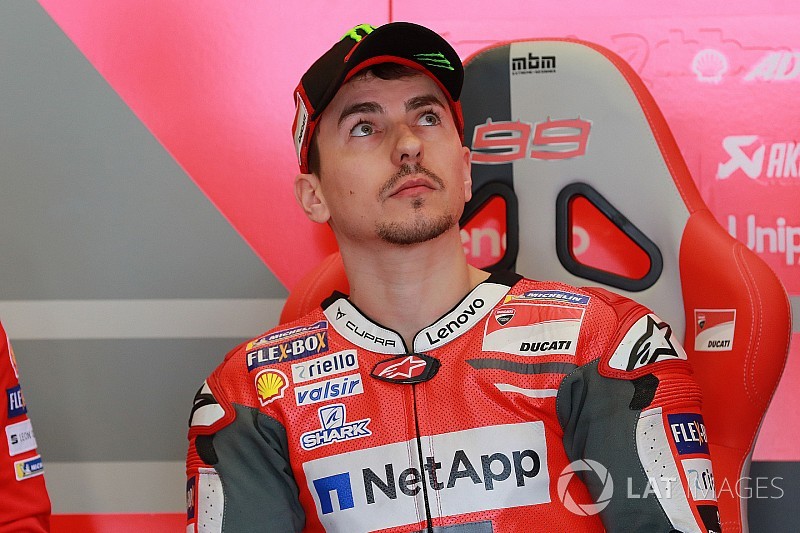 Ducati rider Jorge Lorenzo tried a new variant of chassis during a private MotoGP test at Mugello on Thursday.

Lorenzo was one of a number of big names in action at the Italian Grand Prix venue, along with teammate Andrea Dovizioso and all the works riders from Honda, Yamaha, Suzuki and Aprilia. LCR Honda’s Cal Crutchlow was also in attendance.

Thursday’s action was curtailed in the afternoon by heavy rain, and while most bikes ran without transponders, it’s understood Marc Marquez set the fastest time of the day.

As well as a new chassis, Lorenzo also tested a revised aerodynamic fairing, while Dovizioso was focused on honing his set-up for his home race at Mugello early next month.

Suzuki pair Andrea Iannone and Alex Rins tested a new specification of engine for their GSX-RR, albeit one they are not expected to race any time soon, as well as a new fork.

Iannone and Rins will continue testing duties for Suzuki on Friday alongside test rider Sylvain Guintoli. They will be joined by Aprilia riders Aleix Espargaro and Scott Redding and Ducati tester Michele Pirro.

None of the works Honda, Yamaha or Ducati riders are riding on Friday as they are restricted to just five in-season test days per season each.

Marquez and Dani Pedrosa have both used two days of their allocation, after testing at Jerez at the end of March, while Yamaha pair Valentino Rossi and Maverick Vinales as well as Lorenzo and Dovizioso have all used up three days.