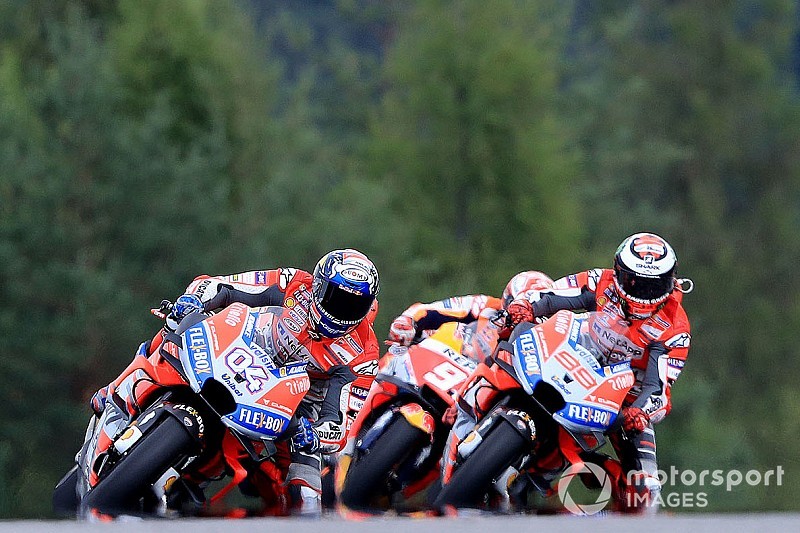 Ducati MotoGP rider Jorge Lorenzo says the strategy he used in the Czech Grand Prix was “very new” for him, as he came on strong at the end of the race.

Lorenzo is famed for his fast starts and tends to be more competitive in the opening stages of a grand prix, with both of his wins with Ducati having required him to take an early lead and manage the race from there.

But having made no initial progress from fourth on the grid at Brno, Lorenzo opted to bide his time and was rewarded for it in the end, coming up only two tenths short of race-winning teammate Andrea Dovizioso.

“This time I needed to change the strategy, especially because I had some problems to finish the race on the front tyre on the right side,” Lorenzo explained.

“I needed to ride quite a bit different from the beginning, and taking profit of a not-so-good start, I decided to stay in third, fourth position for so long, to save energy, to save tyres.

“This was new for me, very new, but this time [it] paid off.

“Obviously I am a rider who has a different kind of riding style, especially on braking, compared to the others, so I always would prefer to have a free way, free track to get the maximum of my potential.

“But today [it] was like an obligation, to be more slow at the beginning and save a little bit of tyre.”

Lorenzo had to fight through Cal Crutchlow and Valentino Rossi to join Dovizioso and Marquez in the lead battle – and felt he had “maybe one tenths more” than the pair.

And having set the fastest lap on the final tour, he reckoned he had only just run out of time in his victory bid, while admitting that having to duel Marquez for second place on the final two laps “didn't help”.

“Maybe I arrived too late," he conceded. “I needed to recover positions maybe a little bit quicker to be in best position to make my attack.

“For sure didn't help that Marc overtook me, but he must try, he always tries, for sure he must try the best for him. Bot for sure it didn't help because Andrea goes away half a second [ahead].

“So that means I had something more, probably not so much but maybe one tenths more than Marc and Andrea, but I couldn't take profit of it because I arrive too late.”