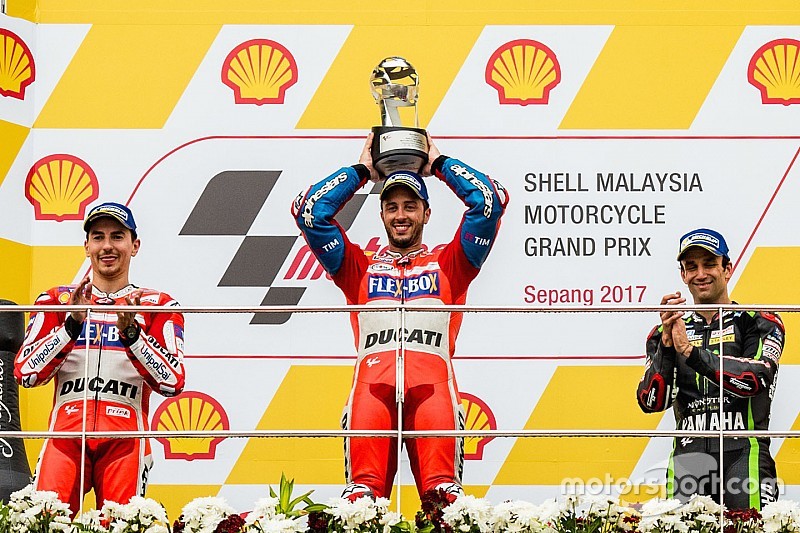 In wet conditions, the two factory Ducatis of Dovizioso and Lorenzo had the clear measure of the opposition, although it was the Tech 3 Yamaha of Johann Zarco that led the early going.

Marquez fleetingly led into the first corner with a great start from seventh, but ran wide to allow Zarco and Lorenzo through into the top two positions.

Dovizioso settled into fourth and pressured Marquez until finding his way past at Turn 14 on the fourth lap, as the top four escaped from the rest of the field.

Zarco stretched a lead of almost two seconds before Lorenzo began to reel in the Frenchman, the only one of the top four who opted for a soft compound rear tyre.

Lorenzo made his move on the ninth lap, with Dovizioso following through a few corners later to establish a one-two out front.

With Marquez unable to make an impression on Zarco in fourth, it meant Dovizioso could take the title fight to Valencia by finishing ahead of Lorenzo, who received what appeared to be a coded instruction on his dashboard to move aside.

It took until lap 16 for the positions to switch, as Lorenzo ran wide at the final corner to allow Dovizioso through and seal his sixth victory of the year by a margin of 0.748s.

Zarco hung on for his second podium of the year, a further eight seconds back, and a similar margin ahead of Marquez in fourth.

Marquez's advantage heading to the finale is cut to 21 points, meaning an 11th-place finish in Valencia will be enough for the Honda rider to seal the crown, even if Dovizioso wins.

Poleman Dani Pedrosa slipped to fifth by the end of the opening lap, and remained in that position for the rest of the event, albeit 11 seconds behind teammate Marquez.

Pramac Ducati’s Danilo Petrucci came from last on the grid to a strong sixth place, having suffered a breakdown on the warm-up lap, beating Valentino Rossi on the best of the factory Yamahas by three tenths.

Maverick Vinales could do no better than ninth on the second works M1, behind the Marc VDS Honda of Jack Miller, while Pol Espargaro's KTM completed the top 10.

Scott Redding spent several laps in sixth, but slipped back to 13th in the closing laps behind Alvaro Bautista (Aspar Ducati) and Bradley Smith (KTM).

Cal Crutchlow was the final points-scorer in 15th after dropping to 21st on the opening lap, while Michael van der Mark missed out on a point in his maiden MotoGP outing on the second Tech 3 Yamaha.

Andrea Iannone also failed to score in what turned out to be another dismal outing for Suzuki, as Alex Rins crashed twice before finally being black-flagged for shortcutting his way back to the pits.

Live: Follow the Malaysian MotoGP race as it happens