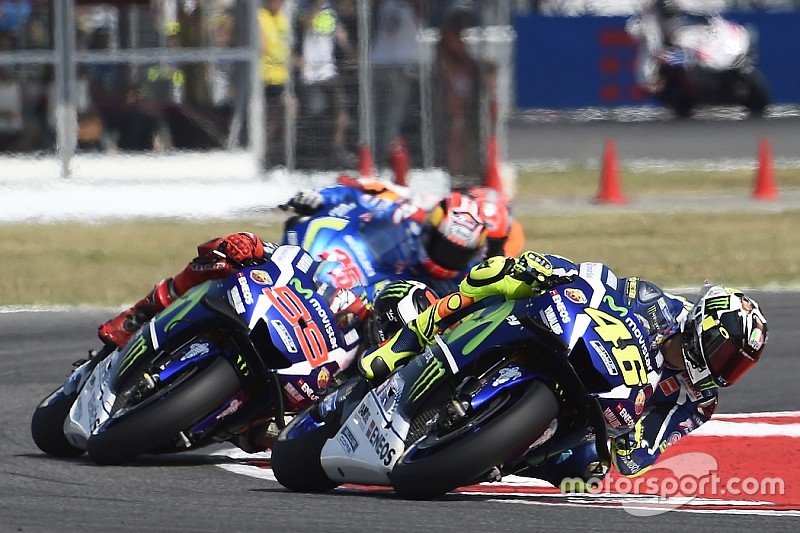 Randy Mamola offers his view on the latest controversy in MotoGP following the war of words between Jorge Lorenzo and Valentino Rossi.

San Marino again provided us with one of those races which are not easy to forget.

Last weekend had it all, from Dani Pedrosa's joy after having found his form, to the drama with Andrea Iannone, who could not say goodbye to Italy as a Ducati rider, and including a public display of the tension Yamaha is enduring.

The war of words the two riders went through on Sunday in the press conference room is clear evidence of that. In that sense, let me just say that, in my opinion, Valentino Rossi and Jorge Lorenzo embroiled themselves in an argument whose main undertone was not the aggressiveness with which the former had overtaken the latter early on in the race.

What keeps them apart is a lot more; it's everything that they have been dragging for the past year sharing the garage and competing to demonstrate who is the quickest and, therefore, who is the number one rider in the team.

But since they used that move on lap 2 of the race to continue with their particular fight, I'll tell you what I think about it: Rossi's pass on Lorenzo was as aggressive as it needs to be to overtake a top rider in MotoGP's current championship situation. No less, no more.

Details like yesterday's highlighted some of Jorge's vulnerabilities, although I still believe he is still the fastest of the two. He may think that the move was a bit too aggressive, but then the move Dani pulled on Rossi to pass him for the lead was too.

Lorenzo argues that in that move, if he hadn't straightened the bike to make way for the #46, he would have crashed. Or rather that Rossi would have put him on the ground. He might be right, but straightening the bike is just a reflex by someone who sees another rider coming, a rider who is usually quicker and who can therefore attack.

We have to keep in mind that in this sport you fight for position, and obviously no one will move out of the way and make it easy for the rider who is trying to move ahead.

There are a lot of overtaking moves like that, and especially lately. Back in my day, with the equipment we had between our hands and legs, the differences were significantly bigger, and that made position changes less forceful, to put it one way.

However, the margins between the fastest riders now are, in many cases, about a tenth of a second thanks to the technological advances, which have made things much tighter.

And with that in mind, when two riders are together on track, the difference between them is tiny, so they have to hesitate as little as possible when they want to overtake the other.

That doesn't mean you can do stupid things without thinking of the others. In Argentina, for example, Iannone made a huge mistake and took Dovizioso with him, but back then it all happened because of a misjudgement that could have been avoided.

An overtaking move is not legal anymore when, for example, the rider uses a rival to slow himself down and not go off. I don't know what you think, but from my point of view, where some see too much aggressiveness, I see a great show.

And if my predictions are not wrong, get ready for what's coming next.