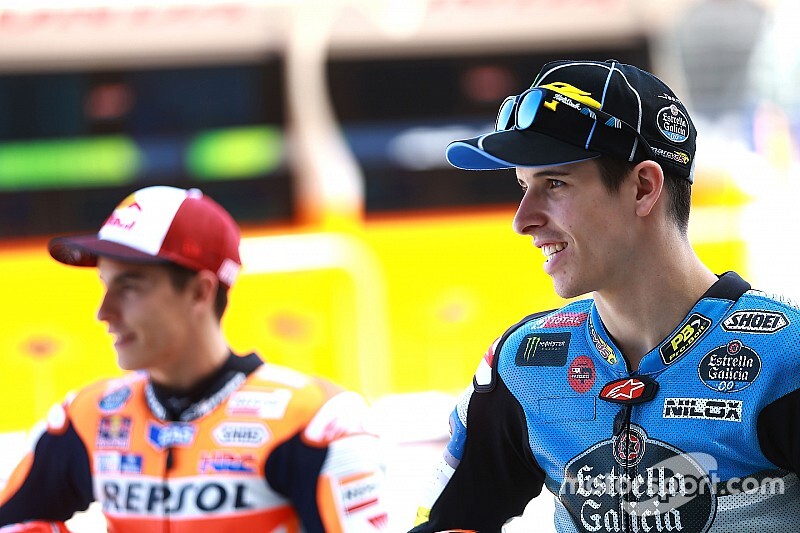 MotoGP world champion Marc Marquez says he won’t change his approach should younger brother Alex become his Honda teammate in 2020, as has been strongly suggested.

Motorsport.com revealed on the Saturday of the Valencia Grand Prix that Honda was closing in on a deal that would bring ’19 Moto2 champion Alex Marquez to MotoGP next year in place of the retiring Jorge Lorenzo.

The younger Marquez was first touted as a candidate to replace Lorenzo on Thursday after Lorenzo’s announcement, but Marc said then – and reiterated in Saturday’s press conference – that he has nothing to do with Alex’s potential HRC future.

When asked about the possibility of being MotoGP teammates with his brother, Marc brushed off any suggestions that this would change his approach next year.

“I learned a lot from my brother, and one of the things is how to avoid pressure because always the comparison is there against a brother and the extra pressure is there,” Marquez said.

“But, in the end, I’m professional and I know that maybe my team-mate for next can be the Moto2 world champion – it doesn’t matter who that is.

“But I know there are other riders too [who could replace Lorenzo] and it’s not in my hands.

“Anyway, before it was [Dani] Pedrosa, then Lorenzo, and the future I don’t know.

“But my target will be to win the world championship and do my best on my side of the box – doesn’t matter who is my teammate.”

Marquez says his younger brother is “proud” to be considered for a MotoGP seat with Honda, but it will all depend on if he is willing to shoulder the “responsibility” being an HRC rider brings.

“Everybody knows the Honda maybe is the most difficult bike for [a rookie] in MotoGP,” Marquez said when asked by Motorsport.com if he was worried of Alex suffering the same struggles as Lorenzo should he join Honda.

“The movements [possible] are quite limited for Honda. But on the list is the [reigning] world champion of Moto2 and I know that he can be my teammate – it depends on Honda.

“And it also depends on if my brother takes the responsibility of this new project or not because some riders had the opportunity in the past to be HRC riders and they said ‘no’ because it’s a big responsibility and it’s a difficult bike.

“But it’s in Honda’s hands. He [Alex] is proud. I spoke with him and he is proud to be on the list already.”

Alex does have a contract to remain in Moto2 with Marc VDS for next year, having been linked to Pramac Ducati for 2021.

LCR stand-in Johann Zarco was one of the names who it was thought likely would replace Lorenzo, but has now been linked to a seat with Ducati at the Avintia squad.

However, he dismissed this idea when Motorsport.com asked about it on Saturday, and said he’d rather return to Moto2 than join what he believes is “not a top team”.

Zarco later acknowledged the potential to take the Marc VDS seat which could be vacated by Marquez.

Valencia MotoGP - the race as it happened