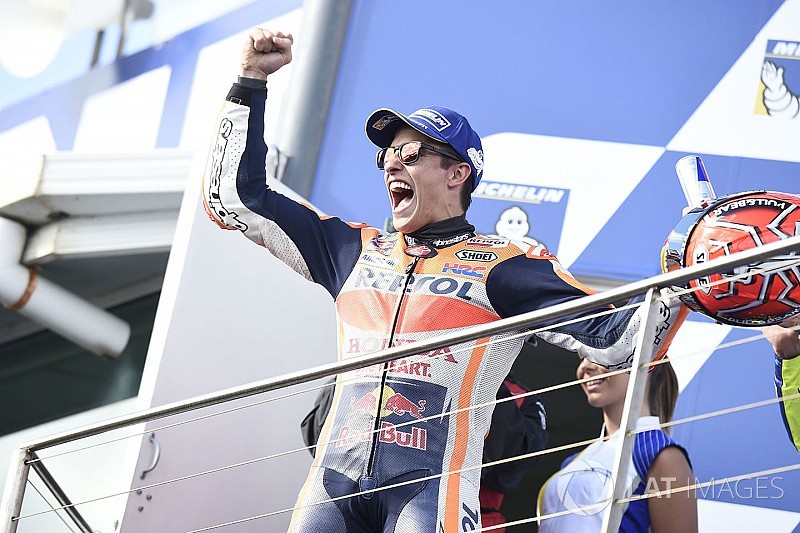 Marc Marquez says the fact he is now 33 points clear of Andrea Dovizioso in the MotoGP title race is more important to him than his Australian Grand Prix victory.

After being beaten in an epic battle at Motegi last weekend by Dovizioso, Marquez struck a decisive blow against his rival at Phillip Island, taking his sixth win of the year in a frantic encounter.

With Dovizioso only managing 13th place, it means Marquez is now 33 points ahead with just 50 left on the table in the remaining races of the season at Sepang and Valencia.

While his main target heading into the race was to outscore Dovizioso, Marquez said he realised early on he would need to be as aggressive as his rivals to avoid being swallowed by a Moto3-style pack that developed at the front of the field.

“Honestly it was an amazing race,” recalled Marquez. “From the beginning, I tried to warm the tyres well, tried to be calm.

"But already on the second or third lap, first contact from Johann [Zarco] I think. I start to realise this will be tough.

"It was a big group like a Moto3 race. I enjoy a lot, I start to realise in the middle of the race that I need to attack or they will overtake me everywhere.

“It was a little bit dangerous sometimes, but in the end I attack a lot, especially middle of the race. When there remained eight laps, nine laps, I say time to attack, time to open a small gap.

“Victory is important, but it makes me happier that 33 point advantage. It’s a big advantage now, now it’s time to breathe, to understand what are options are, where we can fight.

“With these 33 points, I’m feeling really good with the bike, you have extra confidence. Now is the time not to do a stupid thing. I try to plan well and organise well these last two races.”

At around half-distance, Marquez was seen taking several looks over his shoulder in a bid to ascertain where title rival Dovizioso was.

He revealed that he had originally declined his pit crew’s offer to keep him up-to-date with the Ducati rider’s progress on his pitboard, but was overcome by curiosity after a while.

“Before the race we had a meeting, they asked me if I want to know where was Dovi,” Marquez explained.

“I said I don’t care. But then in the middle of the race, I had that question mark – where is Dovi?

“I was looking behind, trying to check for him. I saw him when I was at Turn 4, he was at Turn 3. When I saw that, I started to attack.”

Dovizioso: Lack of speed, not error, to blame for poor finish