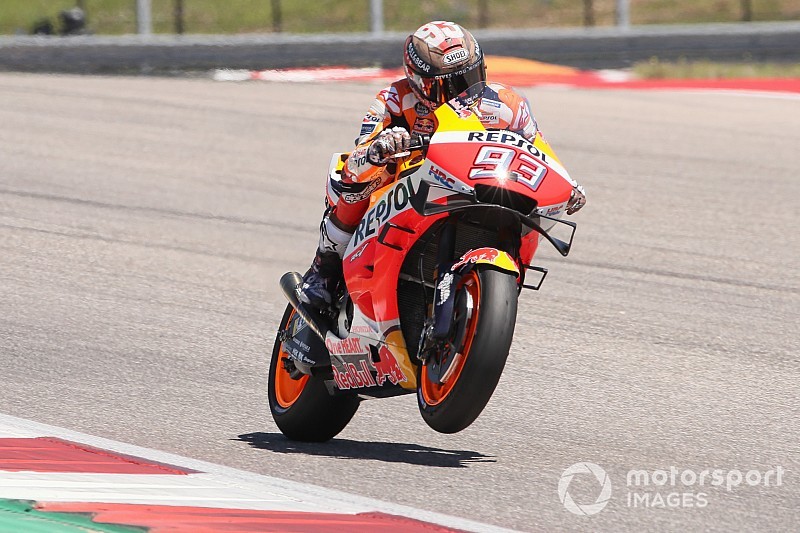 Marquez led nearly the entire 45-minute session as he took the lead with his second flying lap, and stayed in front until just two minutes remained on the clock.

His teammate Lorenzo was then able to demote him by two tenths with a 1m38.045s, but Marquez fought back just as the chequered flag fell.

Marquez first lowered the benchmark by a tenth and then slightly improved once again on his last lap to end the session with a 1m37.921s, the only rider below the 1m38s barrier.

Lorenzo completed a Repsol Honda 1-2 with Maverick Vinales, whose Yamaha team used a winglet by the rear tyre similar to that of Ducati's controversial solution, taking third, 0.191s off the pace.

SRT Yamaha duo Fabio Quartararo and Franco Morbidelli were sixth and ninth, sandwiching the Ducati GP19s of Jack Miller, who seemingly had arm-pump issues during the session, and Danilo Petrucci. The top 10 was completed by Suzuki's Alex Rins.

Johann Zarco was the top KTM in 12th but the Frenchman's session ended in a crash, the only rider to fall in FP1.

Aleix Espargaro was the fastest Aprilia rider, which also tested a rear tyre winglet, in 14th.

Honda tester Stefan Bradl kicked off his first wildcard of the season in 15th while Bradley Smith made his second appearance in 19th, right behind Rossi, who was 1.459s off the pace in 18th.