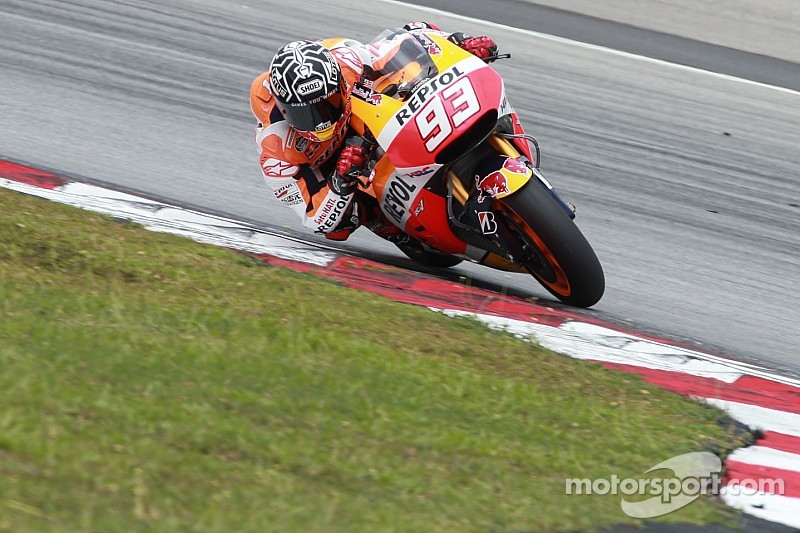 Repsol Honda riders lead the way ahead of Iannone and Rossi

Marc Marquez sent an early warning signal to the rest of the MotoGP field at the third and final day of the first MotoGP test of 2015 at the Sepang International Circuit with the reigning world champion destroying his best lap time of 2014 and the fastest ever rider to lap at the Malaysian circuit.

The truth is that when I saw the time I was surprised, just like everyone else!

Marquez set a blistering pace today and he posted his best lap of 1m 58.867s on lap 8 of 52 with the Repsol Honda team deciding to focus on single lap times early on before concentrating on parts testing, engine mapping and race simulation later in the afternoon. Dani Pedrosa was just .139s off his teammate’s pace with the Spaniard also completing the same 20 lap race simulation.

The Ducati Team will be very upbeat coming away from their fist test of 2015 with Andrea Iannone finishing in third place today while his teammate Andrea Dovizioso finished with the 7th fastest lap today and 1 second away form Marquez but both riders are testing on the GP14.3 with their new GP15 not yet ready to test. Valentino Rossi ended day three in fourth position and set his own personal best lap of 1m 59.401s at the Sepang circuit.

Rossi’s teammate Jorge Lorenzo finished in 6th place today but the double MotoGP World Champion once again hailed the progress of the M1 over the winter and is very positive about returning to Malaysia for the second test at the same circuit between 23rd and 25th February. Satellite Yamaha rider Pol Espargaro failed to let his third crash in three days dent his spirits and finished in 6th today with a 1m 59.851s lap and three places above his Monster Yamaha Tech 3 teammate Bradley Smith.

Stefan Bradl progressed well on his new NGM Forward Racing machine and was once again the top Open Class rider setting a best time today of 2m 0.294s. There will be smiles all around the Team Suzuki MotoGP garage following three positive days with teammates Aleix Espargaro and Maverick Viñales reacting very positively to their new machines with Espargaro finishing today in 10th spot and top rookie today Viñales in 12th with Cal Crutchlow and the CWM LCR Honda team sandwiched in the middle.

Pramac Racing’s Danilo Petrucci worked hard over the three days on the Ducati and finished in 13th with a 2m .970s lap and .213s ahead of Avintia Racing’s Hector Barbera and a further .049s ahead of Ducati’s Michele Pirro. Scott Redding continues to get to grips with his factory RC213V for the Estrella Galicia 0.0 Marc VDS team ahead of Nicky Hayden (Drive M7 Aspar) with the rookie pair of Forward Racing’s Loris Baz and CWM LCR Honda rider Jack Miller next along.

The Aprilia Racing Team Gresini had a tough test with a lot of data collected for the next test with Alvaro Bautista finished in 21st while teammate Marco Melandri ended the test in 28th. Avintia Racing’s Mike di Meglio finished in 22nd with a best time of 2m 2.128s while Karel Abraham was close behind as was newcomer Eugene Laverty for the Drive M7 Aspar team while Alex De Angelis finished with a best lap of 2m 3.471s.

Speaking after today’s session Marquez said, “The truth is that when I saw the time I was surprised, just like everyone else! In any case, I must say that today the track was fast, as we all rode faster than before. I'm glad I was able to set a good lap, but more important is the fact that I felt very comfortable, right from the start. We did a race simulation later on, which also went very well and was perhaps even more important than a single lap.

During the race simulation we tested different mapping and in every part we tried different things. The positive is that with the new bike we are already at the same level as in 2014, and there is still plenty of room for improvement. Now I can’t wait for the second test and to see what progress we can make,” he added.

Pedrosa was also pleased with his work saying, “I'm happy with the work we have done today, because we have made progress in some aspects with the rear. There is still room for improvement, but overall we've taken some pretty positive steps in this test and I think that's a very good thing. The team have also integrated well and we have worked very smoothly together, so I'm very happy about that. We did a race simulation in which we tested the bike for the first time in such a scenario. Obviously there are some things to improve but, considering it was the first time, the findings have been pretty good

Coming away with the third fastest time on the final day really pleased Iannone who is now awaiting to get a chance to ride the much-anticipated GP15 machine. “I am very happy because I return home after a really positive test,” said Iannone who added, “We constantly improved from the first day until this evening. This afternoon we also worked with the second bike and we tried some different settings to try and understand if the modifications were going in the right direction. We also did several tests with the electronics, seeing as we had an evolution version of the software for the GP14.3.

There has been a lot of work over the last three days, and I’m also happy with my new team: the guys have done a great job. Now I’m really anxious to try the new GP15 at Sepang 2 but in any case I’m happy with the way we have improved in the last few months,” Iannone added.

While the second Sepang test is scheduled for later this month there will also be a number of riders testing Michelin tires this weekend.