Marquez bounces back to take eleventh season win at Silverstone 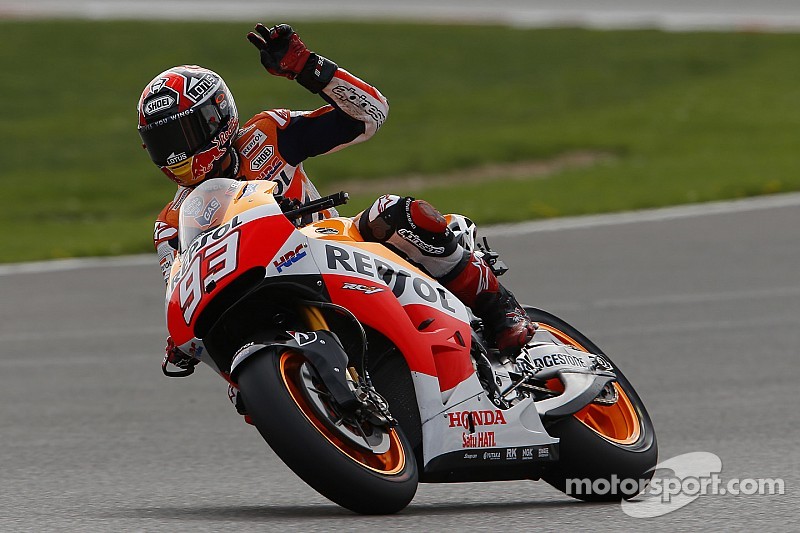 Championship leader takes victory ahead of teammates Lorenzo and Rossi

Marc Marquez took away maximum points from today’s Hertz British Grand Prix at Silverstone with the Spaniard bouncing back from his fourth place finish last time out in Brno to take the victory for the Repsol Honda team ahead of Movistar Yamaha pair Jorge Lorenzo in second place and Valentino Rossi taking the final step on the podium.

I had a score to settle from last year, when Jorge beat me on the final corner, so I am happy to be back on the top step of the podium!

The race turned out to a similar affair to last year’s race here with Marquez the man to beat and Lorenzo not giving an inch in battling for the win after both riders got off to a good start and setting the theme for the race with the countrymen fighting it out right up until the end of the race with Marquez eventually making the decisive move and Lorenzo having to settle for second place despite leading for a considerable amount of time at the start of the race.

The Doctor adds to podium finish with new record

Rossi also had a good start but had too much work to do to catch and the stay with the frontmen and the seven times MotoGP champion secured another podium to his stunning tally and today he also set a new record for the rider with the most starts in the premier class breaking the previous number of 245 previously set by Alex Barros.

Repsol Honda rider Dani Pedrosa fought hard throughout the race but couldn’t overcome the deficit to the leaders from his 5th place starting position and had to settle for 4th and it was a similar situation for Ducati Team rider Andrea Dovizioso who didn’t make the most of his front row start and the Italian finished in 5th ahead of Monster Yamaha Tech 3 rider Pol Espargaro who put in a strong performance to take the bragging rights of top satellite rider.

Stefan Bradl bounced back from a bad day yesterday on the LCR Honda to take a 7th place finish and valuable championship points and the German did enough to stay ahead of Pramac Racing’s Andrea Iannone in 8th and NGM Forward Racing’s Aleix Espargaro in 9th with the final place in the top ten being secured by Scott Redding who put in a gutsy performance on the Open Class GO&Fun Honda Gresini machine with the English rider giving the home fans something to cheer about.

Marquez delighted to get back to his winning ways

Speaking after being back on the top step of the podium Marquez was thrilled in the post race press conference. He said, “I’m very happy with this win! I expected the race to be slightly different, given what happened in practice yesterday, but today with higher temperatures it seems that both Jorge and Valentino took a step forward. Above all, Jorge, because he had a great pace and we were fighting right to the end. It was important to win today, after missing out at Brno. I also had a score to settle from last year, when Jorge beat me on the final corner, so I am happy to be back on the top step of the podium!”

Lorenzo was very happy with his second place finish and in inding better pace with the YZR-M1 after experiencing some difficulties over the first two days of the weekend. “Knowing what this weekend was like, this race is much better than we expected,” said Lorenzo who continued, “I made a really good start and pushed 100%, more than ever, so I am really proud of my riding. The only thing is that here we probably don’t have the best package. Though we did a really good job improving little by little and practice by practice, we were not able to have the same confortable pace as Marc. I was pushing a lot and maybe he was able to relax a little bit more. I was struggling a lot with my physical condition to keep the bike on two wheels and being able to ride these lap times. Finally I lost a lot of time when he touched me.

I knew that he was going to try to overtake me in this corner in first gear on the right, but I didn’t let him enter. On the outside I opened the throttle and he touched me. In the next corner he touched me again as he went into the corner and I lost seven tenths of a second. We started the weekend 1.3 seconds slower than Marc and we finished the weekend with being just 7 tenths slower than Marc after twenty laps. That’s fantastic! Thanks to a very good job from my team, all together we improved the bike,” Lorenzo added.

Rossi was really happy to gain his first podium at Silverstone and in taking another podium. He said, “I’m happy for the podium. It’s the first time here at Silverstone and usually this is a very difficult track for me. I am very happy about my pace at the beginning, because Jorge was in front and pushing a lot, so the lap times were very fast. I was able to stay with them for the first laps, but unfortunately I had already a small gap when I was behind Dovizioso. To try and catch them I stressed the rear tire too much, so I had too slow my rhythm and from that moment I started a very hard battle with Dani and Dovi to the end.

I decided to stay in front because I had a quite good pace and I could arrive on the podium. We have a lot of positive things. We have another podium. On the other side, I wanted to stay behind Marc and Jorge throughout the race. We have to do another step to prepare 100% for Misano in two weeks, because that will be my home Grand Prix and we will have to do more than the maximum,” Rossi added.

Iannone and Hernandez are positive for tomorrow's race