Marquez clinches scintillating seventh win of the year in Catalunya 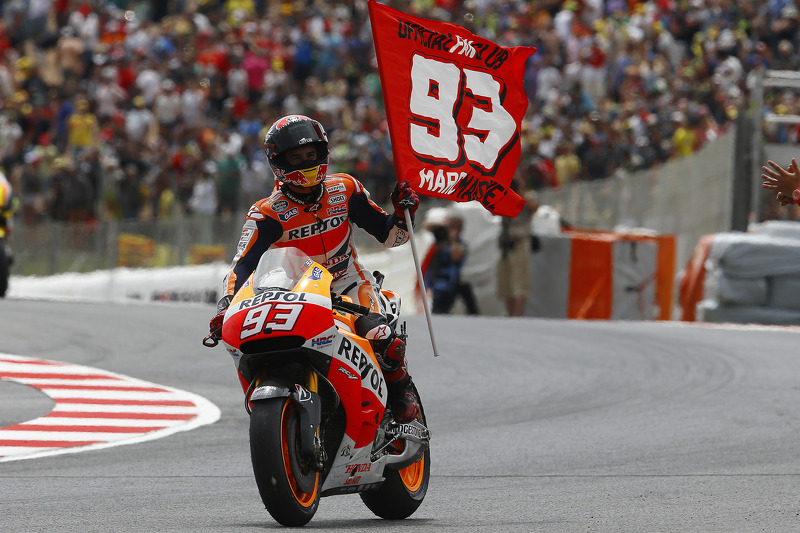 I am very happy about taking another 25 points and also to win on the same day as my brother.

With drama right from the off, Lorenzo leaped into the lead but his holeshot was short-lived with Rossi levering past the factory Hondas and his teammate to take the lead and he would continue to lead at the front for the majority of the race and with the weather forecast predicting rain during the race, the mechanics in the pits were furiously at work getting the second machines ready with a wet weather set up adding further drama to the unfolding race.

Rossi was dominant in the opening exchanges with the seven times MotoGP World Champion using all his race craft to stay ahead of Marquez who had passed Pedrosa a number of times before moving up behind Rossi while Lorenzo was dropped off into 4th within the first third of the race and he had to work hard to stay ahead of LCR Honda’s Stefan Bradl. There was an early retirement for GO&Fun Honda Gresini’s Alvaro Bautista and shortly afterwards Cal Crutchlow also retired his Ducati Team machine. 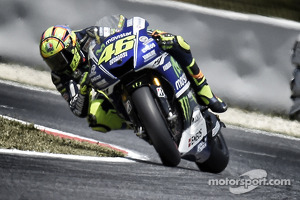 The change at the front came after Marquez took the lead with just seven laps to and the championship leader was lucky to stay on his machine after nearly running into the back of Rossi a few laps beforehand. Rossi stayed on the rear of Marquez but Pedrosa soon moved into second with the Spaniard desperate to take his first win of the year. There was then a surprising incident where Marquez and Pedrosa in both passing Rossi and then lifting their hands as if to signal a red flag but they were mistaken and Rossi moved through into the lead again but the Repsol riders took no time in quickly taking the positions back.

Pedrosa continued to push behind Marquez and the teammates stretched out a .5s lead over Rossi in the final few laps but there was another twist to come with Pedrosa touching the rear of Marquez and running wide allowing Rossi to capitalize and secure second place and his second podium on the bounce. Lorenzo crossed the line in a lonely 4th place with Bradl in 5th, Aleix Espargaro in 6th for NGM Forward Racing and his brother Pol in 7th for the Monster Yamaha Tech 3 team. The top ten was rounded off by Andrea Dovizioso (Ducati Team), Andrea Iannone (Pramac Racing) and Bradley Smith on the second Monster Yamaha Tech 3 machine.

Taking Honda’s 100th win in the four-stroke MotoGP class, Marquez was thrilled with today’s win. Speaking afterwards he said, “I am delighted with this win because this is a track which I have always found difficult. You could see how tough it is for me this weekend: I missed out on pole for the first time this season and had my first crash of the year. The race was very hard with a battle against Dani, Jorge and Valentino. I think that the last few corners were especially spectacular, with the moves by Valentino and Dani. I am very happy about taking another 25 points and also to win on the same day as my brother at home in front of all our fans! It’s something very special” 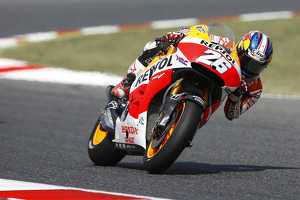 Rossi was happy to have held the lead for such a long time but thought he could have held on for his first victory of 2014. He said, “I’m so happy because it was a great race, I enjoyed it so much. I started fast and I was able to stay in front for a long part of the race. I’m not satisfied 100% because I thought I could win but in the last laps they were faster than me. I tried the maximum but also Dani overtook me and I lost time. I did a good race; it is another podium so we have to continue like this.”

Pedrosa is was very happy to be back in the fight for victory as he explained afterwards, “It was a very good, hard-fought race because we had four riders up at the front for most of the race. There was a lot of overtaking and it was very intense, because we were going so fast. Overall I am very satisfied, even though the end result was not the best; we fought hard and I felt much better physically. I'll take the positives from this race: I got my wish of being up at the front, both in practice and on the early laps of the race, and I ended the race fighting with Marc for the victory!”