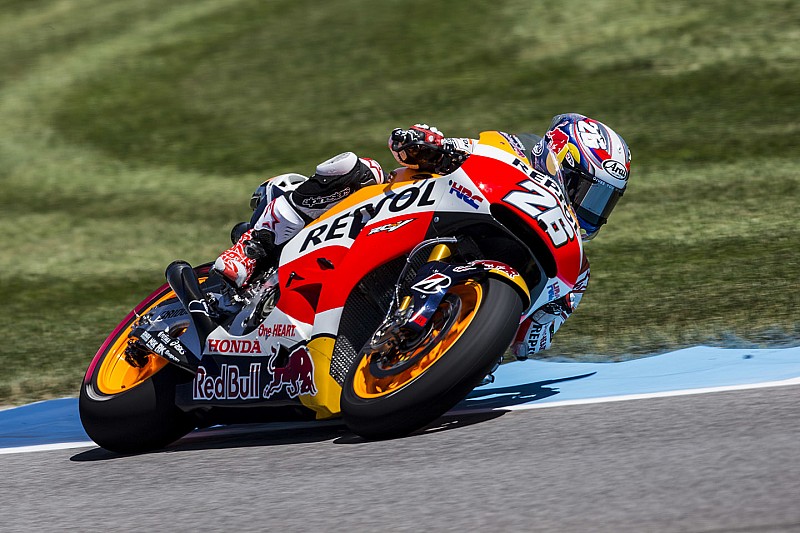 Honda riders have won all the MotoGP races in Indianapolis for the past six years and now celebrate eleven consecutive wins on American soil.

Marc and Dani both lost a position on the opening lap, dropping down to 2nd and 3rd respectively as the race began under a constant threat of a thunderstorm. Together with Jorge and Valentino, they began to open up a gap over the rest of the field and on lap eighteen Valentino passed Dani into 3rd.

The riders split into two groups with Jorge and Marc opening up a gap and with eight laps remaining rain flags were displayed at points around the circuit. Fortunately the storm held off and the riders pushed on, tracing each other lap after lap. Dani passed Valentino on lap twenty three but was passed back within a few corners.

Meanwhile, Marc set a new lap record (1’32.625 lap twenty four, beating his 2014 time of 1’32.831) as he chased down Jorge, passing him in turn one on lap twenty five. He was able to fend off a challenging Jorge and clinched his 7th win in America in the MotoGP class, and crowning Honda’s 700th victory in World Grands Prix. Dani and Valentino continued to trade places on the final lap but despite a valiant effort, Dani was unable to take the final podium place.

Honda riders have won all the MotoGP races in Indianapolis for the past six years and now celebrate eleven consecutive wins on American soil (since Indianapolis 2010). Marc has now moved into 3rd in the Championship Standings, 56 points behind Valentino. Dani remains in 7th place on 80 points after ten rounds of the 2015 season.

Marc Marquez (1st Championship Standing: 3rd - 139 points): "The race went very well, but we were pretty much on the limit. The truth is that Jorge improved a lot during the race, and I didn’t think there would be so many laps in the 1’32s. Even towards the end of the race we did a 1’32.6, which is very fast! We used the strategy of attacking at the end, when there were three laps remaining, and I think it was ideal for taking victory at this circuit. I’m also very proud to have taken Honda’s 700th victory! This is a very special moment for all the team and I dedicate it to all of Honda."

Dani Pedrosa (4th Championship Standing: 7th - 80 points): "It was a very physical race. We had to fight a lot with the bike because the grip was difficult. The surprise was Valentino. I knew my pace was a little slower than Marc and Jorge’s, but after practice I thought I might be a little closer. However, Valentino made a big step forward as usual and we had to fight for the podium; on the last lap he overtook me on the second corner and I couldn’t return the pass. I’m happy for Honda to have achieved the 700th victory, it’s an honour to have played a part in this impressive statistic!"