Marquez dominates Silverstone qualifying ahead of Dovizioso and Lorenzo 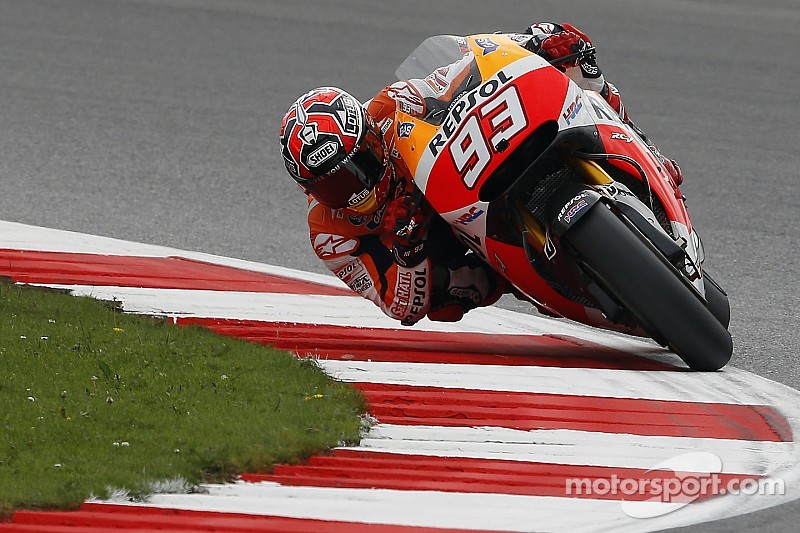 Marc Marquez continued his quest for race win number 11 in this year’s MotoGP World Championship in the perfect way with the Spaniard taking pole position at the Silverstone circuit ahead of tomorrow’s Hertz British Grand Prix while Andrea Dovizioso impressed once again for the Ducati Team securing a second place start ahead of Movistar Yamaha’s Jorge Lorenzo.

I am happy with pole position - more than anything because of how comfortable I am feeling this weekend.

Marquez wasn’t phazed after having a small crash this morning before going on to continue setting fastest lap times throughout the day and this afternoon he ended with a 2m 0.829s lap time giving him his 10th pole of the year. Dovizioso worked hard to stay at the top of the timing sheets and was rewarded with his second place start setting a best lap of 2m 1.140s on the ever-improving Ducati GP14 while Lorenzo also put in a strong performance to take the final starting position on the front row with a 2m 1.175s lap.

Aleix Espargaro had a great day today with the NGM Forward Racing rider securing a fourth place start with a best time of 2m 1.448s and just .016s ahead of Repsol Honda’s Dani Pedrosa with Valentino Rossi taking the final starting place on the second row with the Movistar Yamaha rider putting in a last gasp time of 2m 1.550s after struggling for pace throughout both qualifying sessions. The third row is headed up by the first of the home riders in Bradley Smith and the Monster Yamaha Tech 3 team with his teammate Pol Espargaro just .043s behind.

Stefan Bradl had a tough time today on his LCR Honda machine with the German rider crashing twice but he still managed to grab a ninth place starting position and it was a similar story for Pramac Racing’s Andrea Iannone who crashed out of Q2 heavily while on track to grab pole position. Iannone’s time of 2m 2.064s was enough to keep him ahead of fan favorite Scott Redding with the English rider having to settle for an 11th place start on the Open Class GO&Fun Honda Gresini machine with his teammate Alvaro Bautista starting one place behind.

Marquez was very happy about taking another pole position start and speaking afterwards he said, “It was a difficult qualifying session, because it was hard to get heat into the front tire. However, I am happy with pole position - more than anything because of how comfortable I am feeling this weekend. I am finding it easy to set a fast pace, and this is important at this track, which is bumpy and long. Let's hope that we have a sunny day tomorrow, or at least that it doesn't rain, and we will try to fight for the win right from the first lap.”

Dovizioso finds something extra to take another front row start

Dovizioso is quickly becoming a regular feature in the post qualifying press conferences and was very happy to have taken another front row start. He, said, “It’s really great to be on the front row again! In the last few races we’ve gone very well in qualifying, and I knew I could also do a good lap here at Silverstone. But above all I’m happy with my race pace: we have always used the medium tire, which is probably what everyone will be using tomorrow. I think that we’ll have a chance of doing a good race and of being closer to the leaders, which is always our aim. So far the weekend has been very positive: we’ll have to see what this strange weather will reserve for us tomorrow, but we’ve been working well and I am very satisfied!”

Speaking after securing his third place start, Lorenzo said, “I’m very satisfied and very proud of my lap time. I pushed to the limit and I improved six tenths of a second on the last lap compared to my first try. The soft tire on the front is much better for our bike. I would like to use it tomorrow, but it will be a long race, so we have to improve the bike a little bit more during the warm-up to be more comfortable with the harder tyres.

This year the engine and the clutch are different. I don’t have the same feeling, making it difficult to make similar starts to last year. Starting from third place of the grid is not the best position, because you are too much on the inside for the first corner, but it is still better to be on the first row than to be on the second. It’s a good position. Let’s try to improve the bike for tomorrow and try to stay with the front group during the race,” he added.

Practice begins in Silverstone for the British Grand Prix