Marc Marquez is adamant that Ducati ordered its test rider Michele Pirro to follow him during qualifying for MotoGP’s Italian Grand Prix at Mugello.

Honda rider Marquez scorched to his fourth pole position of the 2019 campaign on Saturday, benefitting from Andrea Dovizioso’s tow to beat Fabio Quartararo by two tenths of a second.

Explaining his strategy afterwards, Marquez said his change of tactic came after becoming convinced that wildcard Pirro, who progressed into Q2 out of Q1, had been instructed by his Ducati team to shadow the reigning champion.

“I immediately see that Pirro was following me all the time,” said Marquez. “It looks like Ducati said to Pirro [to follow Marquez].

“I say ok, second time it will be a different way, I will follow them, I did this kind of strategy and it works in a good way.

“Pirro was waiting for me, but Dovi was there also, and the laptime was perfect. I calculated in a good way the distance, I did a very good laptime.”

Pressed further on whether he really believed Pirro was copying his every move, Marquez replied: “[That] was my feeling. I go out, I go first like always, but Pirro was there.

“I slow down, Pirro was there. I go away, Pirro [goes] away. I did my lap, Pirro was behind me, the first time. Then I stop in the box, now I changed the strategy.

“You play your cards. I saw Dovi was 12th [after the opening runs], so I say let’s follow him, because he needs to push to improve the laptime.”

Dovizioso: "No problem" with Marquez strategy

For his part, Dovizioso, who could do no better than ninth in Q2, said he had no qualms with Marquez choosing to follow him.

“I don't know, from that moment I saw him look [at] me and want to follow me,” said Dovizioso. “He did that but it’s not a big problem, he can do what he wants.

“I don't understand why he followed me but he did pole position, so he did right.”

Marquez predicts Dovizioso will have little trouble recovering to fight for the podium on Sunday despite his relatively lowly grid position.

“Tomorrow he will be there on the race,” said the reigning champion of Dovizioso. “I believe he can be on the podium without much difficulty.”

Marquez also said he has more or less recovered from the illness that was causing him difficulties during Friday's practice sessions.

"I feel much better. On Thursday I was destroyed, yesterday was still difficult, but today I feel better and tomorrow looks like will be even better. 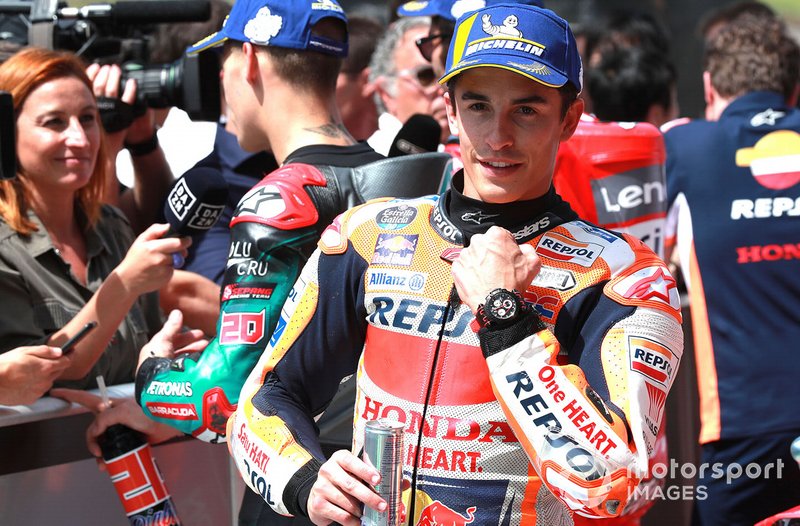