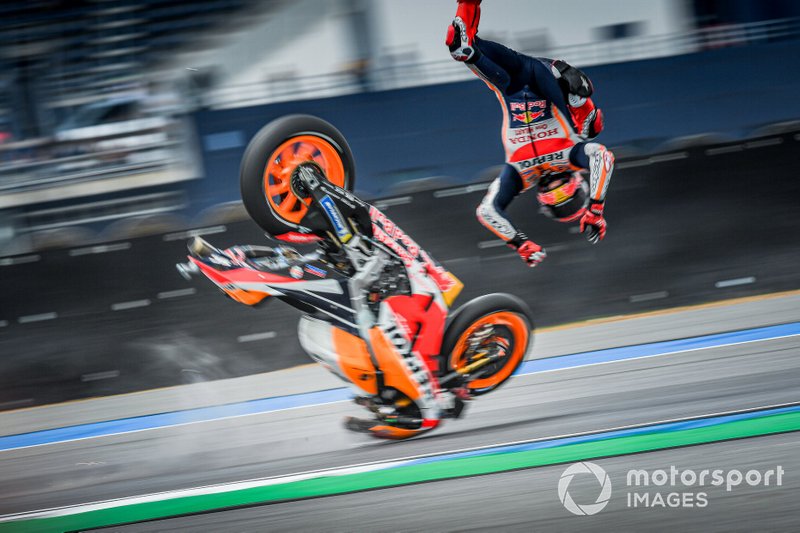 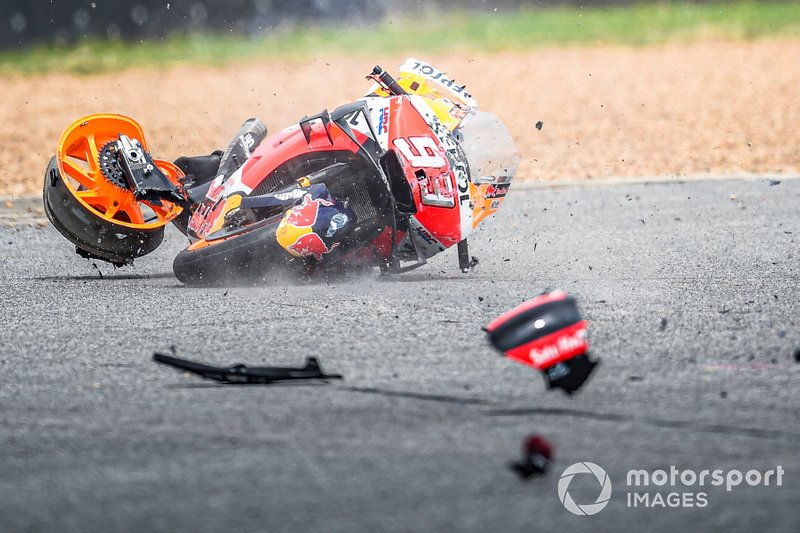 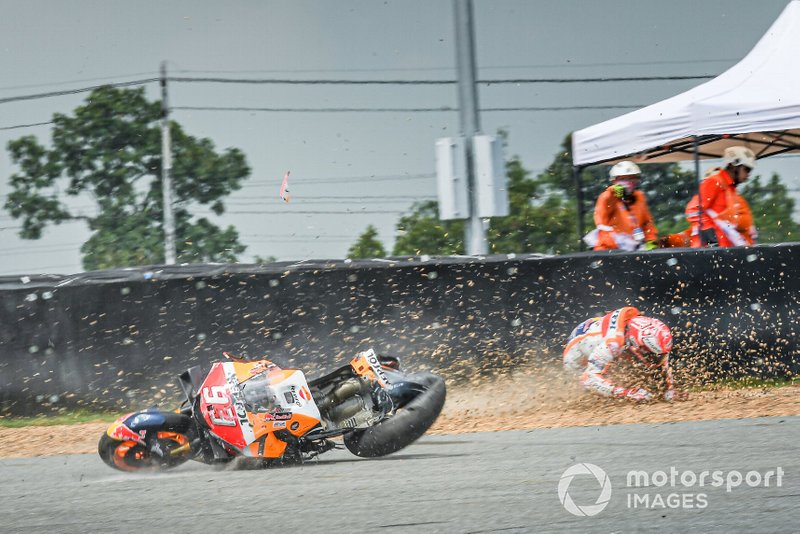 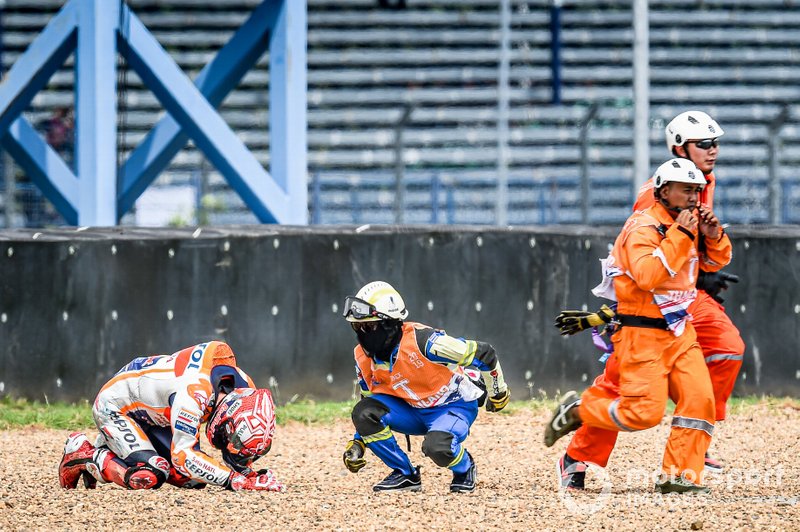 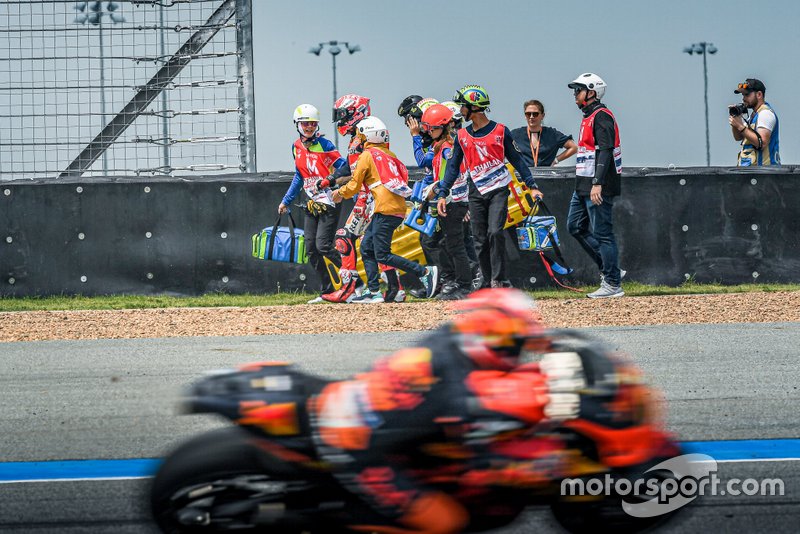 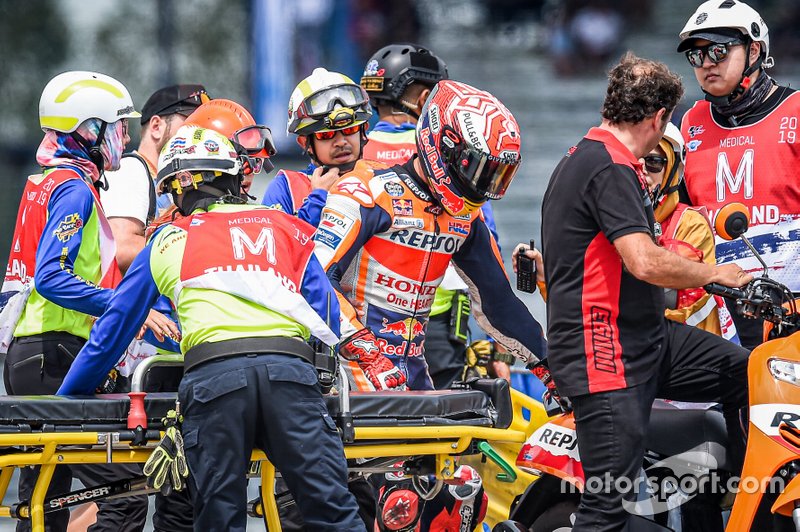 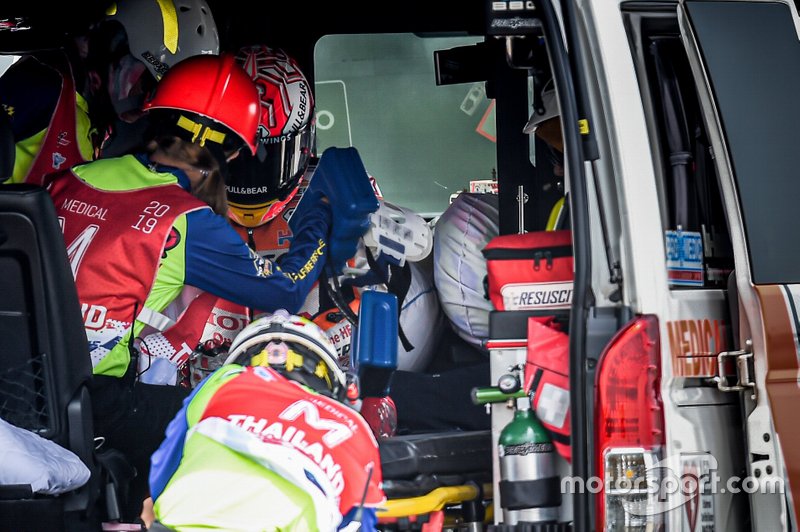 Marquez was on an out-lap in the closing 10 minutes of the session when he lost the rear of his RC213V going into the Turn 7 right-hander and was launched into a highside.

He hit the ground heavily and took some time to get to his feet, while his Honda was wrecked in the resulting roll it took through the run-off area – with the rear of the bike ripped off.

Marquez was taken to the circuit medical centre for initial checks, before being transferred to the local hospital for further assessment on his left leg and back.

Speaking to the press in Thailand, Puig confirmed Marquez escaped injury and will “continue with the plan” in this afternoon’s FP2 session.

“He had a big crash as you all saw, but fortunately he's okay,” said Puig.

“We went to the hospital to check everything, they did an MRI and everything looks fine. Of course, he had some contusions in the back and also in the leg, and also here in the hip a little bit, but nothing to be worried of.

Puig theorised that Marquez’s crash was caused by him accumulating dirt on his rear tyre from running off line on the straight between Turn 2 and 3, as he was not going at speed at Turn 7 and the tyre was up to temperature.

“The thing is that on the back straight, probably he was not on the correct line, he was on the outside line,” Puig added when asked what caused the crash. “Looks like that area is a little bit dirty, and probably the tyre got some dust there and this caused [the crash].

“It’s one possibility, the tyre was not completely clean, that was probably the reason for the crash, because he was not fast, the tyre was on the [optimal] temperature.

“So, it was a matter of that there was probably some dust or dirt on the tyre.”

Marquez comes into this weekend’s Thai round 98 points clear in the standings, and only needs to outscore nearest rival Andrea Dovizioso by two points on Sunday to secure his sixth MotoGP world championship.

Despite his crash, the Honda rider ended FP1 third-fastest having led for much of it, with Yamaha's Maverick Vinales setting the pace ahead of Fabio Quartararo.