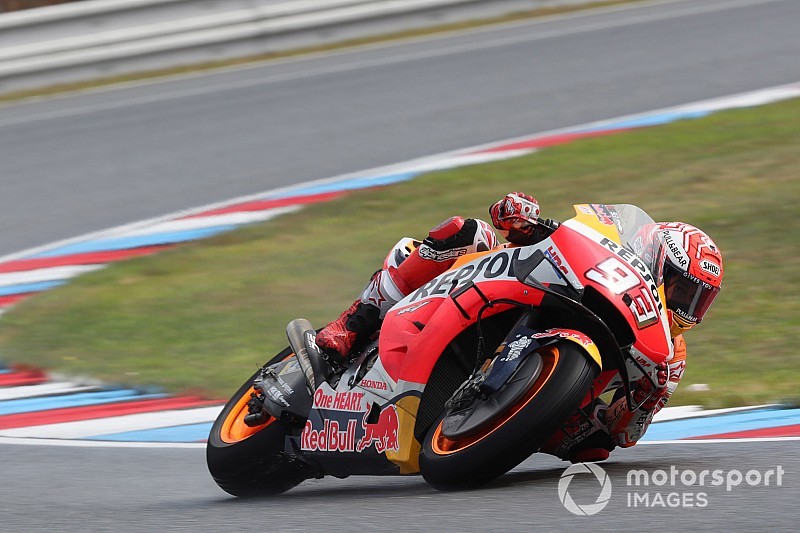 Despite no rain falling on track during the 45-minute session and a dry line starting to emerge towards the end, all riders spent the entire session on wet tyres.

Marquez established himself in the lead with his very first lap and improved several times early on, keep a dominant two-second gap over the rest of the field.

His last fast lap was a 2m04.279s, which remained the benchmark time until the finish.

Vinales ended up taking second with a deficit of 0.588s behind Marquez, with Guintoli securing third.

Danilo Petrucci was fourth on the best of the Ducatis followed by the Yamahas of Valentino Rossi and Fabio Quartararo.

Andrea Dovizioso spent session outside of the top 10 and ended up 13th, 2.3s slower than Marquez.

As nobody could set their best time of the weekend in FP3, the 10 automatic Q2 spots were decided based on Friday's running.

That meant all four Yamaha riders - Quartararo, Vinales, Franco Morbidelli and Rossi - the Hondas of Marquez and Cal Crutchlow, the Ducatis of Dovizioso, Petrucci and Jack Miller, as well as the Suzuki of Alex Rins, all secured their Q2 positions.

MotoGP set for largest-ever calendar in 2020