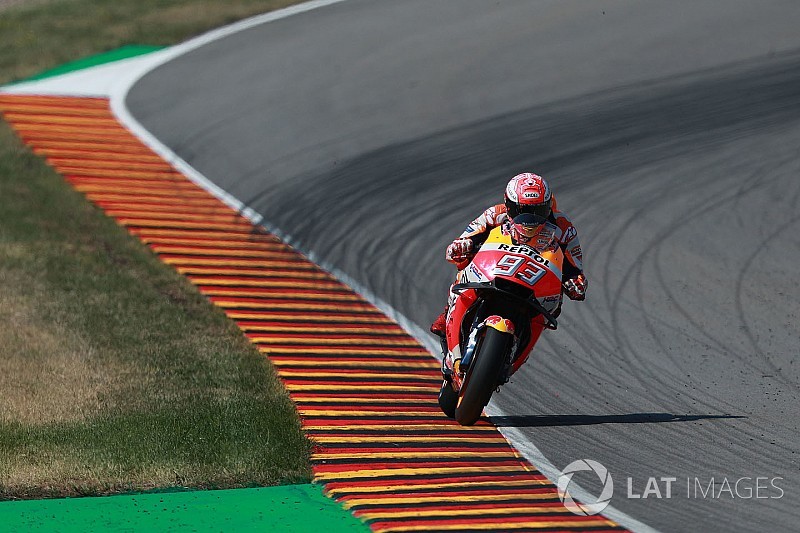 MotoGP championship leader Marc Marquez believes Honda has “lost some performance” at the Sachsenring with its 2018 bike.

Honda is unbeaten in the premier class at the Sachsenring since 2009, and Marquez himself has won each of the past five German Grands Prix.

He was fifth in the combined classification after Friday practice for this year's race, and said the performance of rookie Takaaki Nakagami – finishing a tenth down in seventh in LCR's 2017-spec Honda – suggested last year's bike was a stronger package at the German venue.

“We have a really constant bike, but in this race track in the past it was very strong in a few areas, like we see with Nakagami, riding with the old bike [he] is very fast.

“Maybe with this bike we lose some performance – but [it's important] to understand that the championship is 19 races.

“We will see, we try to win on Sunday. But if not possible to win, we need to understand we have 41 points advantage in the championship and this is most important.”

Marquez, however, was not concerned about his outright pace, as he'd focused on long runs, using a single soft rear tyre in FP1 and a single medium rear in FP2.

“It was what we planned,” he explained. “We just concentrated on the race, like always on Fridays.

“We didn’t use the new soft tyre at the end, for that reason I didn’t improve in the last laps. But it was what we planned, because our priority was another point.”

Nakagami, who is yet to finish in the top 10 this season, said he felt “much better than the last races” at the Sachsenring and targeted an automatic spot in Q2 on Saturday.

His LCR teammate Crutchlow, riding a 2018 bike, felt he had a “bad day” in ninth overall – although he was still well ahead of the third current-spec Honda of Marquez's works teammate Pedrosa.

“No excuses, I wasn't going great today, simple as that - but the bike didn't feel great either,” Crutchlow explained.

“Marc's obviously going very well, Taka's going superb, but me and Dani seem to be struggling a little bit more with the grip at the moment.”

Pedrosa, who announced on Thursday he will be retiring at the end of the year, continued his recent run of poor form with 20th, despite a positive private test outing at Brno recently.

“Very strange today, he said. “Unfortunately for me I had not a good feeling on the bike, I was struggling with the front, I could not turn very well in the corners and I was losing all the time.

“A little bit difficult this year with the bike setting – it seems like I don't find the base setting I can use everywhere.

“In Brno I finish with a good feeling the day, but [the set-up] is not working for this track. So today I face some problems and let's see if I can be faster tomorrow.”