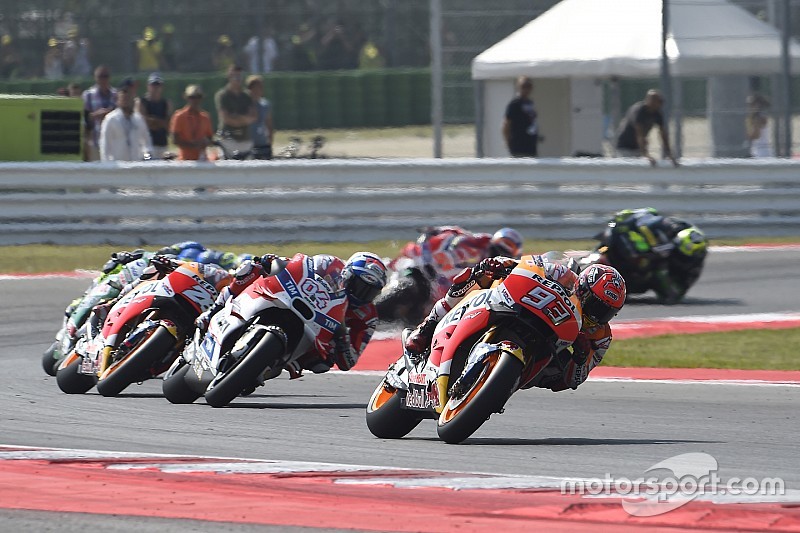 Honda rider Marc Marquez insists he made the optimal tyre choice for the San Marino Grand Prix at Misano, despite finishing off the podium.

Marquez, who opted to ride on the standard-construction hard front, ended the race in fourth place, his championship lead over nearest rival Valentino Rossi cut to 43 points.

Rossi and Jorge Lorenzo - second and third in the race respectively - opted for the new medium front, while Marquez's teammate Dani Pedrosa, who stood on the top step, chose the new soft front.

"It was a completely different choice of the others, but the main problem was during the wekeend," said Marquez.

"The [hard] tyre was the correct option for me. But for some reason, my rhythm was really similar to what I had in FP4, but the others were able to be even faster, especially Dani."

Marquez admitted that, having unsuccessfully tried to work his way past Lorenzo for second early on, he decided to ease off so as not to crash.

"We didn't make the best race. In one part of the race I was really strong, I caught Jorge and I was really close with Valentino, but then I started to feel that if I continued in that way, that riding style, there was more possibility to crash than to finish on the podium."

While Rossi has cut his deficit from Marquez from 59 points to 43 in the last four races, the Spaniard appears unfazed by the trend.

"Of course I would like to increase the advantage, but in the end - in Silverstone, we did a mistake, it was more my mistake, here it was a circuit that was in the calendar as one of the circuits where we would lose more points - and we only lost seven.

"I'm very happy for this, even the result. Of course, I expected to be on the podium but was not possible.

"Now we are going to Aragon, it is a better circuit for my riding style - of course, if I say this, I put pressure on myself, but I feel there we can take a better result.

"The most important for this championship is being constant. Today I didn't feel well and I didn't want to throw away 20 points [to Rossi] like this. We will have time. If we need to take the risk, we will have time - but at the moment we must manage like this."