MotoGP champion Marc Marquez says his teammate Jorge Lorenzo didn't "deserve" to have had such a difficult season as his final year in grand prix racing.

The three-time champion toiled badly on the Honda in 2019 and ultimately chose to depart from the sport at the conclusion of the season, as recent injuries had taken their toll.

Yet despite Lorenzo's ill-fated campaign, his Repsol Honda team beat Ducati to the teams' title in the final race, with the imperious Marquez giving Honda a 2019 'triple crown' of riders', teams' and manufacturers' honours almost single-handedly.

"Finally we achieved our goal, the triple crown, to be able to say that Honda won everything in this 2019 - obviously thanks to the perfect season Marc did, not so much about my help," Lorenzo acknowledged, although both his 28-point contribution and the 16 points scored by stand-in Stefan Bradl were not extraneous given Repsol Honda only beat Ducati by 13 points.

Speaking after he'd concluded the season with his 12th win, Marquez said he was delighted to wrap up the teams' crown also for Lorenzo.

"We finished in the best way, that was winning the race in Valencia but especially taking the teams' championship, because all the Repsol Honda [crew] deserve it, and it's a way to say thanks, or bye, to Jorge.

"In the end the Jorge that I have in mind, that everybody has in mind, is the five-time world champion. And in the end we will celebrate something together, and this also makes me happy.

"Jorge does not deserve to have this as his retirement year, this season does not reflect his great career and what it has meant for motorcycling.

"It meant a lot on his part that he came to celebrate the championship here on the podium with us."

Marquez, who claimed his 12th win of the season in Valencia, had slipped down to sixth at the start but swiftly recovered to second place and reeled in race leader Fabio Quartararo.

And while he'd left it until the last lap to overtake Quartararo for the lead in Misano and Buriram, he sought to pass the Frenchman earlier this time, making the move on the eighth lap and controlling the race from there.

"But apart from that we did a great comeback. In two laps we overtook many riders, and Fabio was going away and in two or three laps I caught him.

"My strategy, I told to Alberto [Puig, team boss] before the race, is try to lead the race. Here for technical reasons I felt better in front than behind and it's what I did - catch Fabio and try to overtake him as soon as possible." 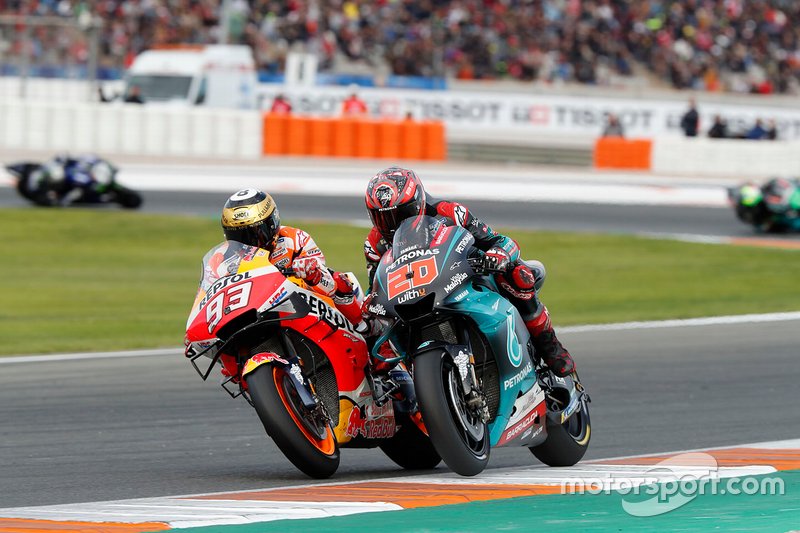