Marc Marquez secured his fifth straight MotoGP win at todays Monster Energy Grand Prix de France at Le Mans with the Repsol Honda rider fighting his way through the pack before taking the lead ahead of Movistar Yamaha rider Valentino Rossi and taking the last step on the podium was GO&Fun Honda Gresini’s Alvaro Bautista whose pace continued to improve throughout the race.

I began a really good comeback it was a lot of fun, ending in my fifth consecutive victory.

The famous Le Mans Bugatti circuit didn’t fail to throw up a few surprises and on the opening lap the fans were treated to a thrilling spectacle that saw Marquez dropping down the field with Andrea Dovizioso taking the lead for the Ducati Team while LCR Honda’s Stefan Bradl jumped into second and Rossi slotting into third from a second row start. Marquez got pushed down the field further after he and Movistar Yamaha’s Jorge Lorenzo came to a near stop after Lorenzo had to take evasive action.

Rossi didn’t take long in leaping into the lead of the race while Pol Espargaro made his way into third ahead on the Monster Yamaha Tech 3 bike and Bradl began to fall back down the field with Espargaro’s teammate Bradley Smith also getting off to a great start. Within the first 10 laps Marquez and Lorenzo were beginning to pick off the riders in front while Dani Pedrosa was lagging behind a little early on.

While Marquez made his was past Lorenzo and started catching the leaders, Lorenzo seemed he was at his limits on the YZR-M1 and was circulating in a solid fifth position. The second third of the race saw Marquez running in third while Dovizioso fell back somewhat and Rossi continued to lead with Espargaro and Bradl in second and third but it wasn’t long before Marquez was nipping at their heels and within a few laps he was chasing down Rossi. 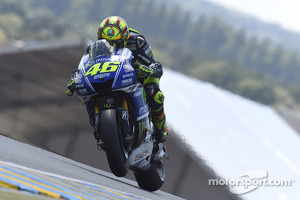 The decisive move came from Marquez when Rossi ran wide and the Spaniard didn’t need to be asked twice to take the lead and start to build an immediate lead on the seven times MotoGP world champion. While the front two positions seeming to be confirmed the main race on track saw the French fans treated to a battle between Bautista and Espargaro and after an intense game of cat and mouse it was Bautista who snatched the final podium position.

Marquez eventually crossed the line just under 2 seconds ahead of Rossi with the Gresini team members sent into rapturous applause with Bautista crossing the line in third. Espargaro narrowly missed out on his maiden MotoGP podium finish but still took a career best fourth position finish while Dani Pedrosa managed to make it past Lorenzo for 5th. Bradl finished in 7th ahead of Dovizioso and NGM Forward Racing’s Aleix Espargaro with the final spot in the top ten going to Smith.

Finishing in 11th was Ducati Team rider Cal Crutchlow with Scott Redding taking 12th for the GO&Fun Honda Gresini team and in 13th was the Energy TI Pramac Racing machine of Yonny Hernandez. Hiroshi Aoyama ended the race in 14th for the Drive M7 Aspar team and taking the final points finish in 15th was the Cardion AB Motoracing Ducati of Karel Abraham. Michael Laverty crossed the line in 16th for the Paul Bird Motorsport team with Colin Edwards having to push his NGM Forward Racing machine over the last few feet of the line after running out of fuel.

Broc Parkes finished his race in 18th for the Paul Bird Motorsport team and in 19th place was Mike Di Meglio on board the Avintia Racing machine. There was bad luck for Andrea Iannone on the Pramac Racing machine who collided with Nicky Hayden (Drive M7 Aspar) coming out of turn 2 with Hayden crashing to the floor and Iannone crashing out just a few turns later. Hector Barbera also retired from the race.

Marquez was thrilled with his fight back through the pack after an uncharacteristic start. Speaking afterwards he said, “I am really happy with this win, which was different to the other victories. I made a mistake at the start; maybe I was too relaxed off the line, then when Jorge passed me I had to take a wide line otherwise we would have touched and as a result, many riders overtook me. However, from that moment on I began a really good comeback it was a lot of fun, ending in my fifth consecutive victory. Although it might look easy to people, we are working extremely hard and this is the reward for the whole team!”

Rossi was happy to have taken the lead and tried his best to stretch his lead but a slight error that let Marquez into the lead proved to be fatal for his chance of the win. For sure I’m very happy about the race and the result,” said Rossi who continued, “I made a very good start and when I saw Dovi and Bradl in front I knew I could go faster than them so I overtook. I got in front and tried as hard as possible but it was more difficult with the front today, maybe because the asphalt was hot. Anyway I tried the maximum and my pace was not so bad. I was waiting for Marc or Jorge and Dani to arrive.”

When Marc arrived I tried to push a lot to stay on the 1m 34s to make the work difficult for him but in the crucial moment of the race I made a mistake in braking. I braked a little bit too deep and went wide. It's a great pity as it was too easy for Marc. If not we could have fought a little bit because today I was not so bad, difficult to beat but for sure more fun. I hoped he would wait for me but... he didn't! We’ll have to try again next week in Mugello, I want to do a good weekend and try to fight with him another time. I’m happy because my target is to be competitive, to stay with the front and fight with them. At this moment I’m not able to win a race but I am always there and I’m enjoying it very much,” Rossi added. 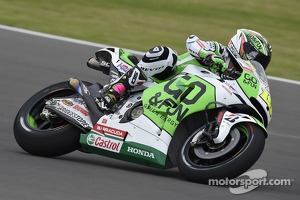 Bautista was thrilled with taking his first podium of 2014 saying, “It’s been an amazing day! We have experienced a difficult start to the season, in which we have suffered so much, but we always continued to work hard, so I would like to thank the team because they worked very well throughout the whole weekend. I knew I could get a good result in the race because during practice we were very close to the other riders, apart from Marquez who has always shown a higher potential.

I started the race pretty well, but in the early laps there was a lot of traffic; in any case I keep calm and slowly I took my pace, recovering many positions. Once I reached the third position, I tried to push to try to catch Rossi, but the gap was too high. Thanks to the whole team and our sponsors, who were close to us even in difficult times,” Bautista added.

French victory makes it five in a row for Marquez