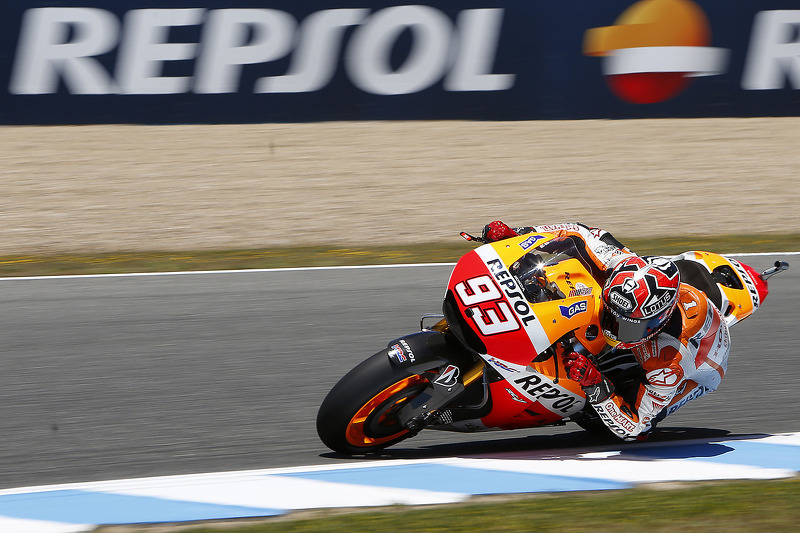 Marc Marquez added another 25 points to his MotoGP Championship tally at today’s Gran Premio bwin de España at the Circuito De Jerez with the 21-year-old securing victory ahead of Movistar Yamaha rider Valentino Rossi with Dani Pedrosa crossing the line to take another podium finish for the Repsol Honda Team.

When I saw that Valentino was trying to pass me on the first corner I knew his intention was to slow down the race. Riding behind him I realized that I could go faster.

Marquez leaped into the lead on the second lap after swapping positions with Rossi a number of times while Pedrosa didn’t get off the line brilliantly but also fought back to settle into 4th position behind Movistar Yamaha rider Jorge Lorenzo who squandered his second place starting position. There were also good starts for the Ducati Team and Andrea Dovizioso and Aleix Espargaro on the NGM Forward Racing team.

Rossi continued to push hard to stay with Marquez but the young champion was able to stretch his lead to no end and within just six laps he was over 3 seconds ahead of the rest of the field. There was bad luck early on for Michele Pirro who was a wildcard entry for the Ducati Team while satellite rider Andrea Iannone (Pramac Racing) also crashed but was able to rejoin the race but there even further bad luck for the Italian manufacturer with Cal Cruthclow then retiring with a front brake malfunction.

Nearing the halfway distance of the 27-lap race, Marquez was well and truly out on his own while Rossi was working hard to stay ahead of Pedrosa and Lorenzo but Lorenzo had to work hard to maintain his pace with Pedrosa seriously threatening his countryman for 3rd. There was more bad luck in the race when Mike di Meglio had to retire his Avintia Racing machine while Karel Abraham also retired after crashing twice. 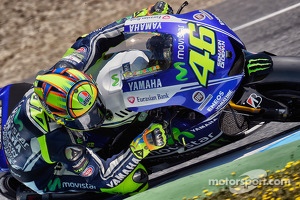 While the crowd were cheering on Marquez out in front, they were also thoroughly entertained with the battle for 5th place with Dovizioso, Espargaro, Bradley Smith (Monster Yamaha Tech 3) and Alvaro Bautista (Go&Fun Honda Gresini) while Pol Espargaro was also going well in the first half of the race but the Spaniard began to fall back in the second half. The crowd were also cheering on both Pedrosa and Lorenzo who battled hard for the first two thirds of the race but Lorenzo couldn’t hold of Pedrosa and had to give best with 7 laps to go.

The final stages of the race saw Pedrosa in hard pursuit of Rossi looking to secure another Repsol Honda one two and it looked like Pedrosa was going to succeed but Rossi’s experience enabled him to stay ahead of the Spaniard to take his second podium finish of the year and the some 100,000 fans who packed into the Circuito De Jerez were sent into a state of ecstacy when Marquez treated them to a massive stand-up wheelie as he crossed the line to take another maximum points finish. The battle for 5th place also went down to the wire with Dovizioso managing to win the four-way battle. There was also bad luck at the end of the race with Colin Edwards retiring his NGM Forward Racing machine on the final lap.

Speaking afterwards, Marquez said he wasn’t interested in getting involved with a race-long battle and instead decided to pass Rossi and lead from the front. “I started well today,” said the championship leader who continued, “But when I saw that Valentino was trying to pass me on the first corner I knew his intention was to slow down the race so he could control the pace. Riding behind him I realized that I could go faster, so I tried to overtake him as soon as possible. I was surprised, because I wasn't expecting to open up a gap. Anyway, I am in good form at the moment, but I can see that Dani, Valentino and Jorge are giving their 100% in every practice and in every race. I'm sure that sooner or later will come a race in which we are unable win, but we will have to learn from that and try to take important points.”

Rossi was very happy to be back on the podium at Jerez where he has amassed six premier class wins in his career. He said, “I’m very happy because Jerez is one of my favorite circuits and race weekends, also for the people around the track and the atmosphere. We worked very well during the weekend and improved the bike, also this morning and it looked like I could be quite competitive for the race. I chose the extra hard tire on the front, it was a risk but I was worried about the medium at the end of the race. The condition of the track today was very bad, the bike slid everywhere and the front kept closing. 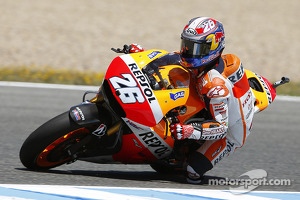 I think I did a great job, I did a good start and I tried to stay with Marc but it was impossible. After that I tried to keep my pace and push where I could and where my bike was well balanced and I kept quite constant. At the end Dani arrived but I had just a little bit of desperation in the last lap to stay in front. I’m very proud and happy to arrive in second position here as it was 2010 the last time I stood on the Jerez podium,” Rossi added.

Pedrosa maintained a good pace throughout the 27 laps and said he could have achieved one place better if he had one more lap saying, “The race today was very difficult; I had problems with the front tire from the opening lap and I tried to overcome the situation as best I could. I saw that Marc was breaking away but couldn't do anything to stick with him - it was completely his race today. I was able to stay behind the Yamahas for many laps, and at the end I made my attack. I was able to overtake Lorenzo but would have needed one or two more corners to try and pass Rossi. I did my best and took third place. We will see if at tomorrow's test we can be closer to Marc and fight to the maximum at the next race.”

Marquez now leads teammate Pedrosa with 100 points to his 72 while Rossi sits in third on 61. The MotoGP riders will be back on track in Jerez tomorrow, Monday 5th May for a one day test while the next round of the MotoGP World Championship takes place in Le Mans between 16th to 18th May.

Dovizioso qualifies on row 2 for tomorrow’s Spanish GP, Crutchlow and Pirro further back on grid