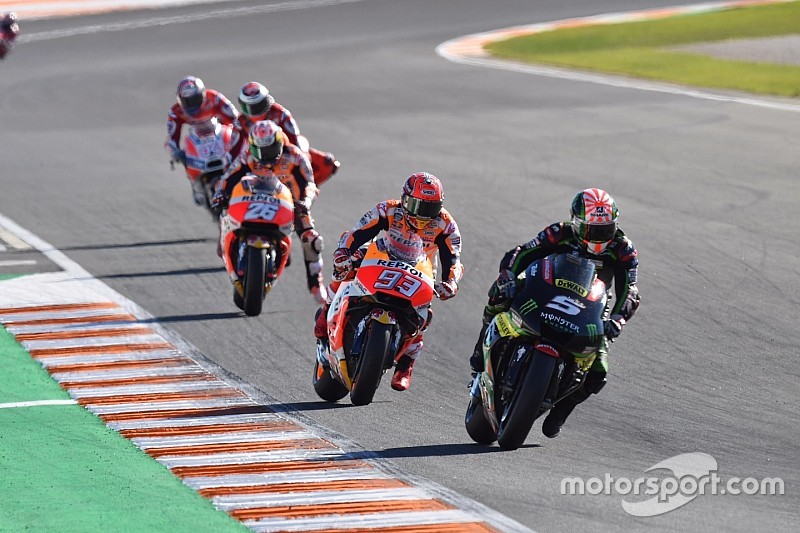 Marc Marquez says the incident that nearly jeopardised his 2017 MotoGP title hopes in the season finale at Valencia was brought on by fears of a costly collision with Johann Zarco.

Honda rider Marquez needed only to finish in the top 11 in Valencia to make sure of his fourth premier-class title in five seasons.

He appeared content to run behind the Tech 3 Yamaha of long-time race leader Zarco for most of the race, but passed the Frenchman in the final corner with seven laps left – only to nearly crash right away at Turn 1.

Marquez, who went on to finish the race in third and clinch the title, admitted he was too hasty in trying to break away from the Tech 3 rookie – who had garnered a reputation for aggressive moves in his first season in the premier class.

“I was behind Zarco and I was able to be much faster,” Marquez recalled while talking to BT Sport. “But I said 'ok, keep calm'.

“When I overtook Zarco to try to push, because I felt my pace was better, I was a little bit scared.

“I was scared that Zarco go in and have some contact. I decided to push that hard that lap, but I pushed too hard.”

Having missed his braking point, Marquez slid wide, only just keeping the bike upright with his left knee and forearm.

A crash would've put his title in danger – with championship rival Andrea Dovizioso running in the lead pack at that point – but Marquez explained it had been “so difficult” and “impossible” to maintain a risk-free approach.

He recalled: “During the race I was always trying to be calm, trying to control the situation. But suddenly I say 'okay now it is time to push' because I felt really good.

“But in Turn 1, honestly, I lost the concentration on the brake point, I brake too late and, you know... Marquez-style until the end!”

Dovizioso: Lorenzo didn't hold me up despite team orders