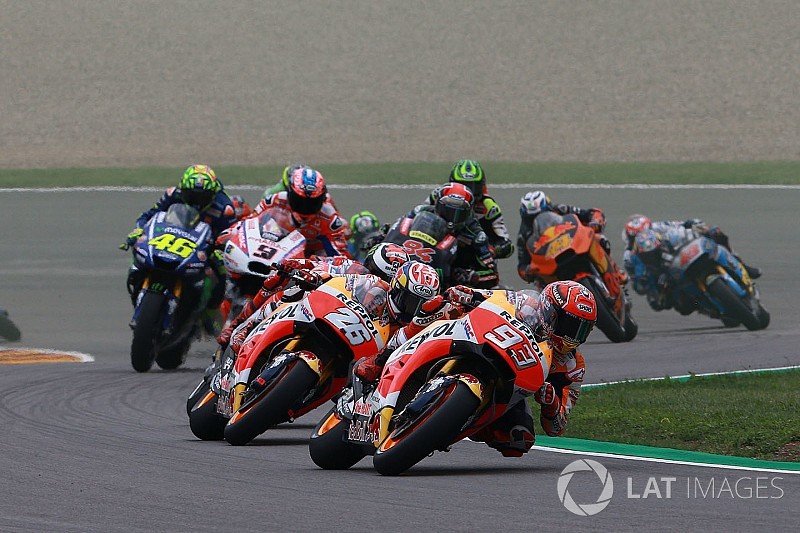 Marc Marquez says he never expected to lead the MotoGP championship heading into the summer break after picking up his second win of the 2017 season at the Sachsenring.

The reigning champion extended his perfect record of German Grand Prix victories in the premier class on Sunday, beating Tech 3 Yamaha rookie Jonas Folger to vault to the head of the standings.

At the halfway point of the campaign, Marquez holds a slender advantage of five points over Maverick Vinales, with Andrea Dovizioso and Valentino Rossi six and 10 points behind respectively.

It marks a major turnaround from last month's Mugello race, when the Repsol Honda rider lagged 37 points behind Vinales, and was pessimistic about his chances of catching up.

"Three races ago I was 37 points behind," said Marquez. "But before Assen I received a WhatsApp [message] from [crew chief] Santi Hernandez, and he said, 'Don't worry Marc, you will be leading the championship by summertime'.

"I said, 'okay, what did you drink?' because we were very far. But in the end we need to trust [ourselves], we need to believe in our job, we need to keep pushing like we did.

"I was not counting the days since my last win in Austin, I knew I had to be patient."

With such a strong record at the Sachsenring, Marquez admitted he had earmarked the German track as one where he needed to win, especially after failing to fight for victory the previous weekend at Assen.

"There will be circuits that are better for us and others that are worse," he said. "This was one of the good ones and I knew if we didn't win here it would be very bad, and we almost didn't win.

"Assen was another target, was try to finish in the podium," he added. "And maybe in Assen to take more risk I was able to fight for the victory, but it was too much risk.

"But the championship is very long, and in all conditions we are always there, we never drop a lot the level, so this is the most important.

"And it's nice to go on holiday leading the championship - only [by] five points, but it's better to be five points in front than five points behind."

Along with teammate Dani Pedrosa and LCR rider Cal Crutchlow, Marquez will head to Brno for a two-day test on 17-18 July ahead of the next round of the season at the Czech track on 6 August.