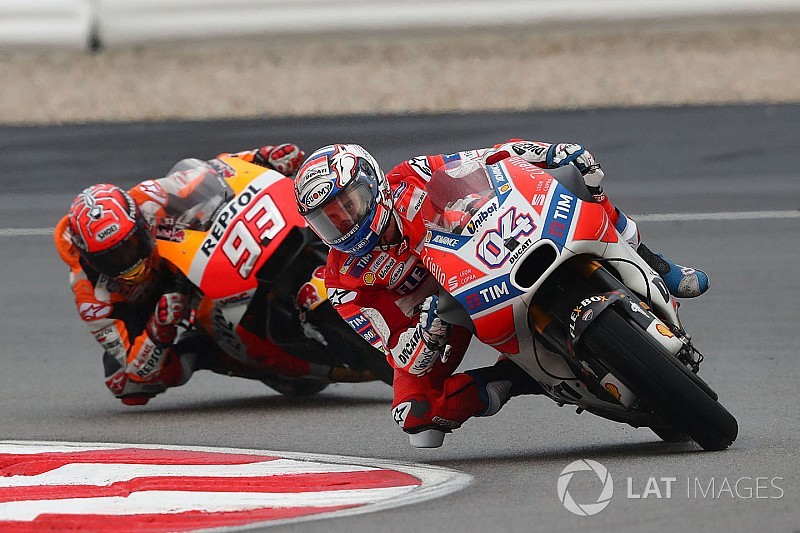 Marc Marquez admits there was no sense in him pushing to finish higher than fourth in MotoGP’s Malaysian Grand Prix, given his comfortable advantage in the points.

Honda rider Marquez had the opportunity to seal a fourth premier class title with a round to spare at Sepang, but was unable to take the fight to championship rival Andrea Dovizioso in the wet conditions.

While Dovizioso beat Ducati teammate Jorge Lorenzo to the win, Marquez finished off the podium in fourth behind Johann Zarco’s Tech 3 Yamaha, 17 seconds behind the winner.

It means Marquez takes a 21-point lead to the season finale in Valencia, where an 11th place finish would be sufficient to take the crown.

Marquez admitted that he decided there was no point in pushing for a podium place for the sake of three extra points that would have made little difference to his chances.

“I started the race quite aggressive at the start, then I realise both Ducatis were faster than me,” recalled Marquez.

“Then I realise when I was catching Zarco, I was taking some risks, then I was thinking on the bike, ‘It’s more or less the same to arrive 24 points [ahead] or 21 in Valencia.’ So I decided to stay in fourth position.

"Something that is so important in races is to be calm all the race, don’t be rash, try to find your rhythm.

“Maybe if I took more risks I could be champion here, but if I crash I could be only seven or eight points [ahead]. Better to take it step-by-step.”

Asked why he was unable to take the fight to the Ducatis, Marquez explained that a lack of confidence on braking and corner entry was what cost him dearly.

“The problem is one of my strongest points is braking points and entering corners, I was not strong like in other races,” he said.

“For some reason, I didn’t have the feeling. Already on Friday in wet conditions the feeling was not so good.

Dovizioso did not ask for Ducati team orders in Sepang