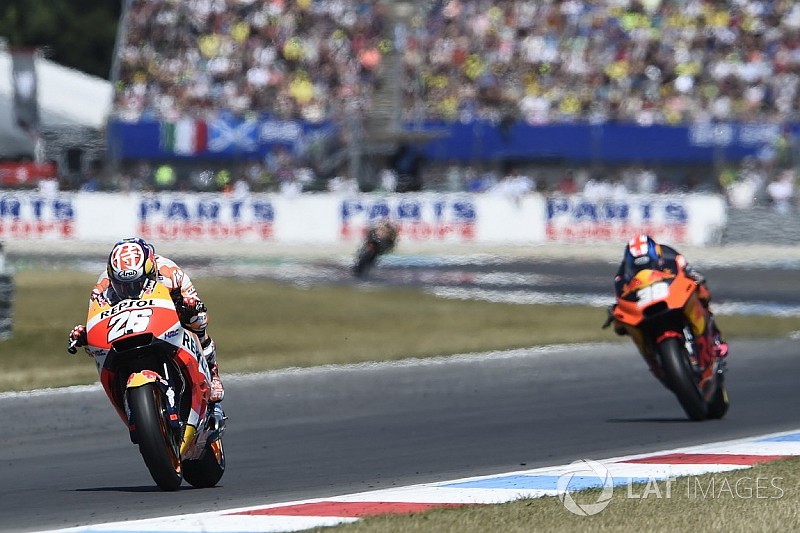 Dani Pedrosa's current MotoGP struggles stem from a lack of motivation that is making it "impossible" to be fast on the Honda, according to Marc Marquez.

Pedrosa, who is being replaced by Jorge Lorenzo at the Repsol Honda squad for 2019, endured a miserable Dutch TT last weekend, qualifying down in 18th and salvaging a single point for 15th.

It marks the latest in a poor sequence of results for the Spanish veteran, who has slipped to 12th in the standings having scored only 12 points in the last three races.

“Dani is going through a difficult situation," said Marquez of his teammate. "Assen is one of the tracks where he struggles most due to his physical condition.

"But with our bike, if you are not motivated, it's impossible to be fast. Our bike shakes a lot, you have to ride it with bravery."

Pedrosa is expected to stay in MotoGP next year as part of a new satellite Yamaha team owned by Sepang and backed by Petronas, although official confirmation of the deal has yet to materialise.

Speaking in Barcelona, Pedrosa admitted uncertainty about his future had affected his performance, and he reiterated that sentiment after his dismal run to 18th on the grid at Assen on Saturday.

The 32-year-old ended up finishing fourth in a five-rider group comprising Pol Espargaro's KTM, the two Aprilias of Aleix Espargaro and Scott Redding and the Avintia Ducati of Tito Rabat.

"It was a very difficult weekend," said Pedrosa. "It didn’t start well in the race and we didn’t make any progress in the beginning, I lost some positions so difficult to take the rhythm.

"More or less [I had] the same feeling as in practice and then little-by-little in the race when laps were going I started to get faster and faster and more comfortable and I improved my laptimes.

"My problem was I caught the group and then I was losing a lot in the last chicane so it was difficult for me to make a clear overtake and then I [was] stuck behind the group and I started lapping again slow.

"Then I ran out in Turn 1 to avoid crashing and then I lost two to three seconds to the group in one lap, for two laps I pushed and went again to a good pace.

"The positive part at the end is that I was lapping strong, [except for] in the beginning or [using] new tyres. So I have to work to be faster with the new tyre so I can qualify stronger."