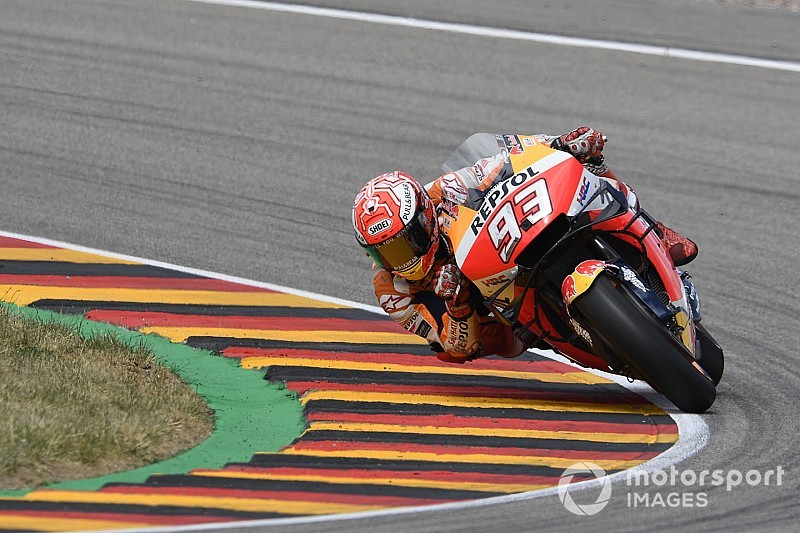 Marquez had a comfortable gap over his Q2 rivals from the get-go, taking the lead with a 1m20.575s with his first lap and then immediately pitting for his second bike.

His second run ended with him beating his own lap record with a 1m20.215s and he then switched tyres again.

Fabio Quartararo put some pressure on Marquez as the session was coming to an end, but even his best effort of 1m20.400s was nearly two tenths off, and the Honda rider then improved again as the chequered flag fell.

Marquez ended up with a 1m20.195s, with Quartararo taking a heroic second place after dislocating his shoulder in the morning FP3 session.

Quartararo beat Maverick Vinales by 0.006s, the Yamaha duo set to share the front row with Marquez on Sunday.

Suzuki's Alex Rins, who had an off-track excursion early on, was fourth, with Pramac rider Jack Miller, who was temporarily as high as second, taking fifth as the best of the Ducatis.

Cal Crutchlow was an impressive sixth with an injured right knee for LCR Honda, followed by SIC Yamaha's Franco Morbidelli and the KTM of Pol Espargaro.

Rossi had advanced from the first part of qualifying in the top position, but his session ended with a fall at Turn 1, seemingly compromising his subsequent Q2 run.

Petrucci had a disastrous Q2 as he was furious with Mir impeding him early on, and then suffered a high-speed crash at Turn 9.

Petrucci's teammate Andrea Dovizioso struggled in Q1, initially looking flustered by Karel Abraham trying to get behind him for a tow, and sitting outside the top two after the opening runs.

He made a solid improvement in the beginning of his second run but he was swiftly demoted from the top spot by Rossi.

Nakagami, who is forced to use crutches to walk due to his accident in the Dutch TT, then edged Dovizioso by three thousandths of a second as the chequered flag fell.

The Ducati man will thus start the German GP 13th alongside the Repsol Honda of local rider Stefan Bradl.

Avintia Ducati rider Tito Rabat crashed at Turn 1 and will round out the grid in 22nd.

Sachsenring MotoGP qualifying as it happened