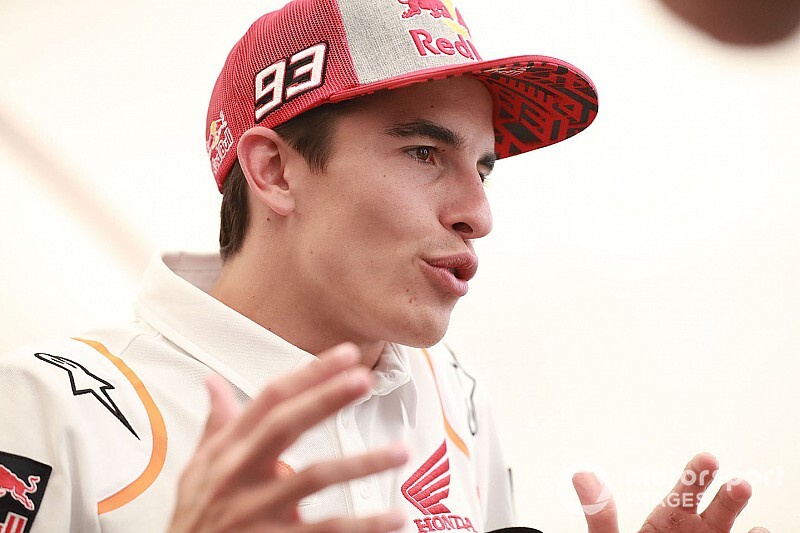 Fernandez beat local hero Fabio Di Giannantonio in a breathless late-race duel, his victory allowing him to close within 28 points of Marquez's brother Alex in the Moto2 title race.

The manner of the win was controversial, however, as Fernandez's aggressive race-winning pass at Turn 14 came after he had run wide and onto the green paint at Curvone in pursuit of his rival.

Di Giannantonio felt Fernandez should've been penalised, but with penalties reserved for persistent track limits abuse the Spaniard was allowed to keep the win after a stewards' hearing.

"Of course in the end it's the decision of the race stewards, but I think it's one of the main things we will speak about in the Safety Commission," Marquez said when asked whether he'd agreed with the verdict.

"Why? Because in the end of course the green part is something that is out of the limits of the track, and the way that this time Fernandez - but it doesn't matter [which] rider - used [it], I mean, it's not fair.

"He used a lot the exit of Turn 6 when two laps remained - that means you gain also a little bit and it's the last two laps, the front guy is pushing. Then if you keep these jokers for the end of the race, it's not fair to use [then].

"Then of course the overtake in Turn 14 start in the fast corner on Turn 11 [Curvone], and this is, when you are riding in Misano, very easy to understand."

Marquez said he himself had foreseen a similar turn of events in the MotoGP race at Misano, which was decided in a thrilling last-lap dogfight between himself and Fabio Quartararo.

The Spaniard said he had broached the possibility of exceeding track limits at Curvone in a late-race battle with Honda team boss Alberto Puig and crew chief Santi Hernandez.

"During the race in Moto2, I was speaking with Alberto and Santi, and I was saying, I already predicted that [it] will be a fight against [Maverick] Vinales or Quartararo.

"I said, 'they are very fast at Turn 11, what happens if in the last lap I use the green [part] and I attack the last brake point [at Turn 14]. And they say, 'it's not fair, they will penalise you'. But then somebody did [it] in Moto2, and they didn't penalise.

"But for me, [it's] some window that, if you open this window, will be a lot of different things on the future. So we need to penalise these kind of actions, because in the last laps it's not fair."

On Thursday afternoon, MotoGP announced that Di Giannantonio's Speed Up team had appealed the outcome of the Misano Moto2 race. It was subsequently announced the appeal had been rejected.