Marc Marquez broke the MotoGP Red Bull Ring lap record to secure a dominant pole position on Saturday, but admitted that his fastest effort was not without mistakes. 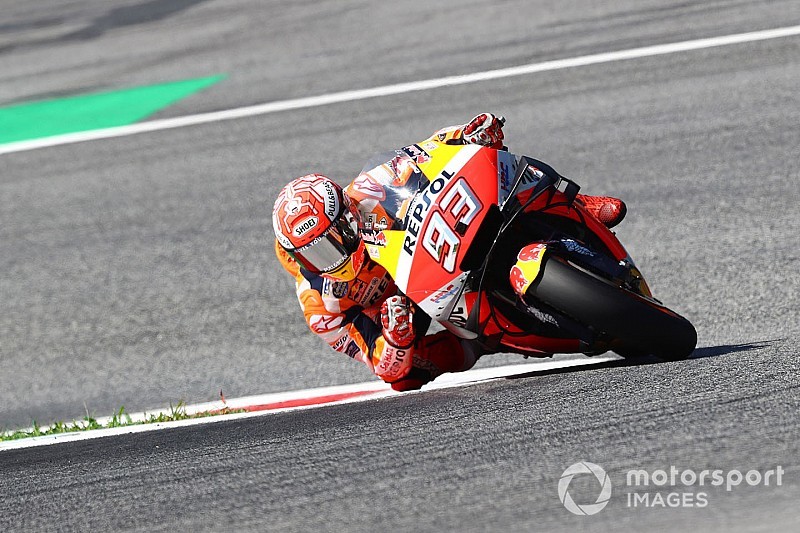 It was Marquez's 59th pole in MotoGP, the Honda rider setting a new record for most pole positions in the premier class.

However, Marquez said that he was aiming for a 1m22s laptime, and that he regretted an error at the final corner of the track.

"Was a really good lap, I was looking for the 1m22s but I did a mistake on the last sector, went too wide at Turn 10," he said after qualifying.

"When I saw the gap I was surprised because I expected that the everybody was a little bit faster or closer.

"Anyway today, the track was very slippery in FP4 and quali. Especially with quali when it’s slippery, it’s one of my strong points.

"When I want to stop the bike with sliding with the two wheels from the rear, and then I can brake later than others sometimes.

"But yeah, in this circuit for example it’s working well. But in other race tracks more flowing than [Austria], I cannot use that advantage.

"But anyway you can [only] use this style for one lap or two laps, three laps."

However, both Marquez and Ducati rider Andrea Dovizioso - who qualified third but has been widely tipped as the biggest threat to the championship leader on Sunday - felt that the two of them are much more evenly matched in terms of race pace.

When asked by Motorsport.com about Marquez's four-tenths advantage, Dovizioso said: "He was so fast. I mean the temperature was so high during that laptime.

"So for sure he did something special, like [he does] many times. But fortunately our [race] pace, we are a bit closer."

"I mean in the race pace [the gap] is not four tenths. He [Dovizioso] is much closer," Marquez agreed.

"And we need to work hard and understand well and choose the best option for the race to try to finish in front of them."

Dovizioso's teammate Danilo Petrucci explained that Marquez is gaining a lot of time on Ducati during turning.

"For sure Marc is doing a great job, his pace is better than anyone's, I followed him for two laps in FP4 and my pace was not enough, he got always two or three tenths more.

"It is difficult to stay with him. I tried but he got something more. With brakes we are good but when he brakes he can carry the speed inside the corner with brakes and for us at the moment is still not possible."