Marc Marquez scorched to another pole position at the Le Mans Bugatti circuit today with the reigning MotoGP champions now securing all five pole positions of this season so far. Starting alongside Marquez in tomorrow’s Monster Energy Grand Prix de France will be Monster Energy Yamaha Tech 3’s Pol Espargaro wit the rookie having a great qualifying session to set the second fastest time ahead of Andrea Dovizioso and the Ducati Team.

Marquez immediately leaped to the top of the timing sheets and would eventually set the fastest ever pole lap set at Le Mans of 1m 32.042s with Espargaro a further 0.692s behind and Dovizioso setting a best time of 1m 32.755s. Starting from the front of the second row will be Stefan Bradl with the German setting a best lap of 1m 32.846s for the LCR Honda team while Valentino Rossi secured a fifth place start and just 0.027s ahead of his teammate Jorge Lorenzo. 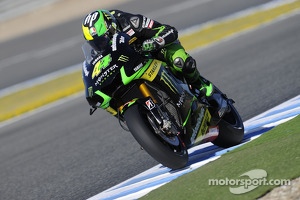 The 7th fastest time was set by GO&Fun Honda Gresini rider Alvaro Bautista with a best lap time of 1m 33.006s while Aleix Espargaro was a little off the pace on the NGM Forward Racing Yamaha to set the 8th best lap of 1m 33.015s. Dani Pedrosa was an uncharacteristic 9th fastest today with the Repsol Honda rider securing the final place on the third row just .035s ahead of Monster Energy Tech 3 rider Bradley Smith. The final two places on the fourth row went to Andrea Iannone (Pramac Racing) with a best lap of 1m 33.102s and the Ducati Team rider Cal Crutchlow with a 1m 33.315s lap time.

Speaking afterwards Marquez said, "I'm very happy to be on pole and also with the gap between myself and second place on the timesheet. Tomorrow will be interesting as my main rivals - Dani, Jorge and Valentino - are not on the front row but on rows two and three. However, I know they will be there in the battle and we must be prepared. Starting from pole is an advantage and I will try to capitalize from it and give 100% - as always - to fight for the win!” 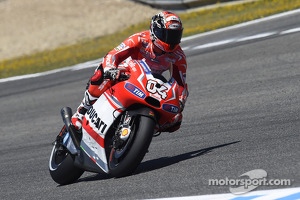 Thrilled with grabbing his first ever front row start, espargaro was delighted in saying, “I am flying high right now, and am really happy and proud that I was able to produce this lap at the team’s home race. This is very important for me, as the team and I have done a lot of work during the preseason and for the first few rounds, so this qualifying result is like a small victory. The race will still be a challenge, as there are many laps and not just one however I am confident with my pace. For sure, the factory riders may seem faster and have more experience, but starting from the front will still be a big advantage for me compared to the other races so far. I intend to fight whilst trying to learn as much as possible, and I feel like I can clinch a great result for the team and it would be perfect to go home with plenty of championship points in my pocket. I will make the most of the start and see what I can do.”
shares
comments

Yamaha: Action begins in Le Mans for the French GP