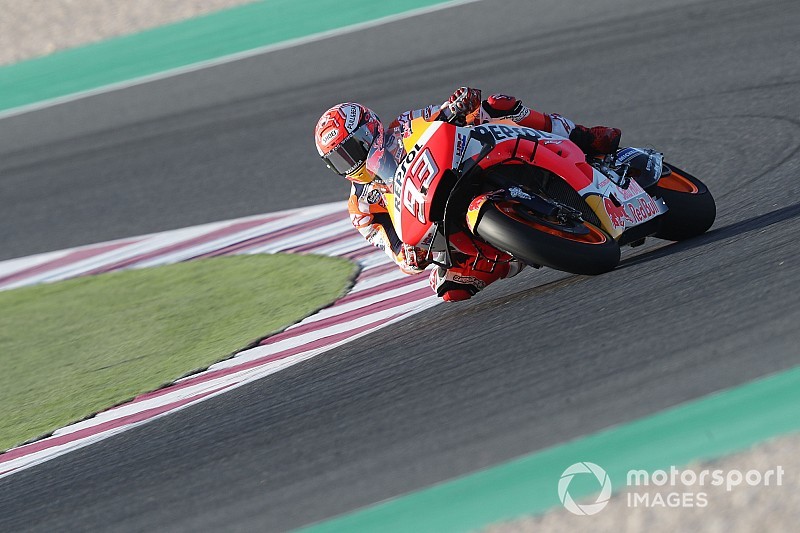 The combination of heat and strong wind ensured laptimes in the daytime FP3 were almost uniformly slower than what was set in the Friday evening FP2 session, so the roster of riders securing an automatic bye to Q2 was left unchanged.

Only Pramac Ducati rider Francesco Bagnaia, KTM's Pol Espargaro and Tech 3 KTM's Miguel Oliveira managed to improve on their previous best times of the weekend, and their efforts weren't enough to break into the top 10 in the combined classification.

Lorenzo, who was narrowly outside that top 10 after Friday, crashed less than halfway into his first flying lap, high-siding off the Honda through the sweeping Turn 6 left-hander.

He seemed to be in pain after the crash, and immediately called time on his session, heading to the medical centre for x-rays on his back and neck. He is understood to have escaped any major injuries.

Just moments after Lorenzo's shunt, Marquez went wide over the kerb exiting Turn 13, which caused the bike to fold under the reigning champion.

By that point Suzuki rider Alex Rins had already recorded a 1m55.142s, which kept him top of the timing screens until the very final minutes of the session.

Marquez, who had remounted the bike after his crash, went almost half a second quicker than Rins with less than five minutes to go.

Valentino Rossi, who topped FP1 but was left outside of the overall top 10 after FP2, used a fresh soft rear tyre late on in an attempt to secure a Q2 bye.

He was not successful, finishing the session in fourth place, ahead LCR Honda's Takaaki Nakagami – who is likewise resigned to contesting Q1.

Rins was sixth despite crashing at Turn 2 after the chequered flag, while Franco Morbidelli led fellow Yamaha rider Maverick Vinales in seventh, with all three progressing to Q2.