Marquez overcame crash pain to "save" his qualifying 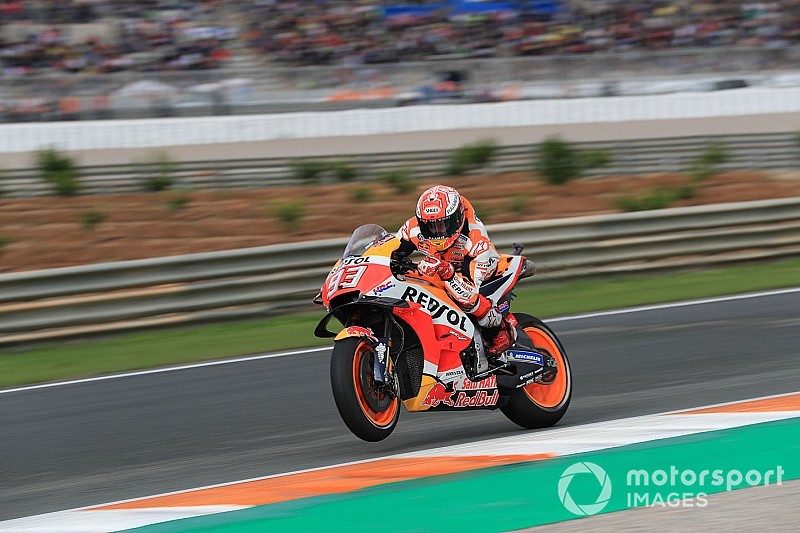 Marc Marquez was happy to have “saved” his qualifying in Valencia by placing fifth, the MotoGP champion overcoming lingering shoulder pain from a mid-session crash.

Marquez, who earlier identified his left shoulder as a “weak point” and is set to have it operated on in December, looked well-placed to claim pole in Valencia after comfortably topping the sole dry practice session of the weekend.

Yet the Spaniard crashed at Turn 4 on his very first flying lap in Q2 and looked in pain as he got up after rolling through the gravel.

Marquez got back to his pit garage and says he was cleared by a doctor to return to track action, which he did in the final minutes of the session, finishing just 0.130s off poleman Maverick Vinales.

“I was unlucky because I was not pushing, just maybe the tyre was not the correct temperature, I lost the front,” Marquez said. “I arrive in the gravel, anyway I already feel something strange on the shoulder.

“I cool down a few moments, but I arrived with a doctor and we make the check and was everything fine, so I feel ready to ride again.

“I go out again on the track, of course I didn't push like normal, because it was painful and I was not [with] enough confidence to push, but even like this we finish just one tenth behind the pole position, in fifth place,

“Happy because in the end we saved the qualy.”

Marquez dislocated his shoulder when celebrating his 2018 title success on the cooldown lap in Motegi, and admits it has not been “100 percent” since.

“Of course since Motegi, the problem is that I didn't stop. I ride in Phillip Island, I ride in Valencia - the shoulder, the injury is there. It's something you can fix only with surgery.

“Last week, training a little bit, not with the bike, I feel some strange movement and again the pain appeared.”

The Spaniard has insisted, however, that he “feels safe” to ride and explained that the Valencia incident was not as severe as what happened in Motegi.

“Was different because in Japan I need help from my mates [to fix it].

"Today of course I felt something strange but then I tried to move [it] and I felt a small crack. But that was it.”

Marquez is famed for shrugging off crashes with relative ease, but admitted he struggled to take the Valencia accident out of his mind on his final run.

“Of course was [it] impossible [to ignore] because the pain was there. I just did two laps and then the last lap I already stopped in the box because [that] was enough, I say, 'okay, I don't want the pole position, just I want time to be there in the two front rows'.

“I think [fifth] was even better than what I expected, because the pain was there, but the most important is that I was ready to ride the bike, like we see, because the laptimes were fast.

Rossi "very uncomfortable" in the dry in Valencia