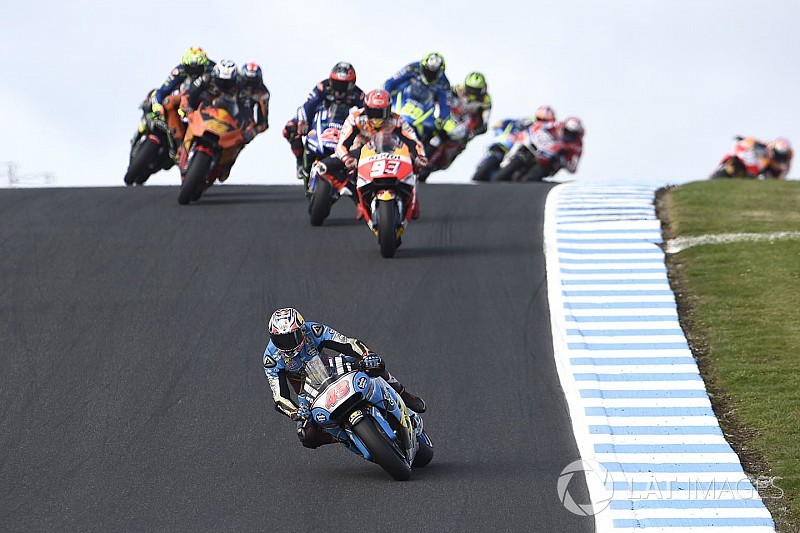 Jack Miller says he backed off after jumping into a sensational lead at the start of last Sunday’s Australian MotoGP race, as he looked to learn from the other riders how best to manage the rear tyre.

The Aussie caused a stir in the opening stages of the Phillip Island race, jumping from the second row of the grid to the lead on the first lap, before stretching his advantage to the best part of a second.

He held onto the lead until Lap 5, when he dropped back into the eight-bike pack that was scrapping at the front of the field.

While unable to get back to the front after relinquishing the lead, Miller did make several more appearances in the top three during the frenetic race, and ultimately came home an impressive seventh on the Marc VDS Honda.

Speaking after the race, Miller admitted that he didn’t mean to lead for quite so long in that early stint, and that he purposely backed off so that he could use the other front-runners as a ‘marker’ in terms of tyre management.

While he feels he may have backed off a little too much, he says he’ll be better prepared when he returns to Phillip Island on the Pramac Ducati next year.

“I was just thinking in my head 'Jesus, is this really happening?’” he said of his fast start to the race.

“I got a decent start, then Marc [Marquez] sort of ran wide and opened the door for me. So I just pushed through because I thought, ‘What better place to be on the first lap than first?' – especially into Honda because normally the more bikes you have behind you, you lose a lot more time there.

“So I pushed through and it was good, I had a really good opening couple of laps. I pulled out a little gap on the guys and it was pretty decent.

“I don't know if it felt long for you guys, but it felt like f***ing forever for me!

“Honestly on the third lap I buttoned off a little bit, just to allow the others to come through. I probably pushed a little bit too hard on those first three laps and burnt maybe a little bit too much tyre than I should've. I wanted whoever was behind me to come through because I wanted sort of a marker, just somebody to set the pace so I wasn't out there spinning my tyre off its head and destroying it.

“I probably did that a little bit too much once I got a few laps in behind Marc, and understood what he was doing on his tyre in terms of Turn 2 or 3, and especially over Lukey Heights. I started doing that but it was probably too little too late.

“I have learnt what I need to do for next year, hopefully.”

While the early starring role didn’t result in a dream podium on home soil, Miller says he’s still very satisfied with a seventh place finish – particularly having sat out Japan and come into Phillip Island just three weeks after surgery on his broken right leg.

“The cocky, confident fellow inside me, he is like, 'Yeah you'll be alright' – but the real me was like, 'Hang on, this isn't gonna be easy' to come back here, let alone ride and be competitive as we were,” he said.

“It was a pretty good weekend, solid weekend all around. Top 10, nearly top five in every session, so I'm pretty happy with the performance this weekend from myself.

“I just said to the boys [the leg] didn't really give me any grief [during the race]. I didn't really notice it, up until I went to do a burnout in front of my fans. I was sitting at Turn 4 and I sort of straightened it out and it was, 'Ooh, that's a bit stiff’.

“Once I was on the bike it was fine.”