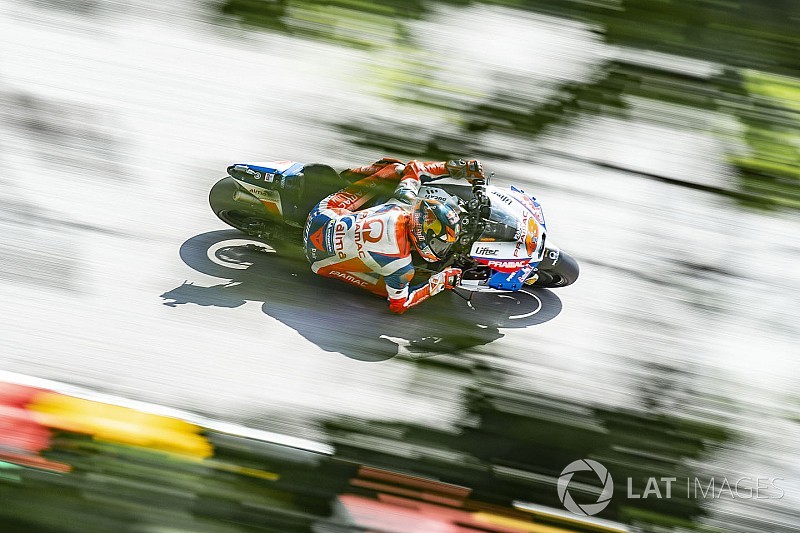 MotoGP star Jack Miller says he needs to start qualifying better if he's to avoid first-lap run-ins like the one that compromised his German Grand Prix.

Miller was caught up in the drama between Pol Espargaro, Andrea Iannone and Alex Rins on the opening lap of the Sachsenring race, a trip through the gravel trap dumping him to the back of the field.

The Aussie fought back to 14th, exactly where he started.

While describing himself as an "innocent bystander", Miller says he's happy to take some of the blame for being caught up in the incident.

He reckons it's a symptom of a poor run of qualifying form, having now missed Q2 three races on the trot, and that he has to turn that around if he wants to reduce the risk of first-lap shenanigans.

"I ran off through the gravel trap, managed to miss all the bikes and riders and got as far as the wall, managed to stay on and dug myself out of that, and there I was in last place, 29 laps to go and a fair way behind the rest of the pack for something I basically had nothing to do with," Miller wrote in his post-race Red Bull column.

"My pace was good enough to be well inside the Top 10, that's the annoying part. But part of that is on me too, because I've got to qualify better than where I did in 14th.

"That's three races in a row I've missed Q2, and that's the problem when you get buried for the start like that, you end up back in the pack with those sorts of guys and there's always drama.

"For the second half of the season we have to recover some of the qualifying pace from the first half of the year; I was in Q2 for five of the first six races and you can avoid some of that other stuff when you're ahead of it and they're all running into one another instead of me.

"That's got to be a focus for me because someone else's problem can destroy your race like it did for me this time."

Miller's qualifying results have ranged from his sensational pole in Argentina to a lowly 18th in Austin. In the last three races, he's qualified 13th in Spain, 16th in Holland, and 14th in Germany.

Bautista: I can’t do more to prove I belong in MotoGP