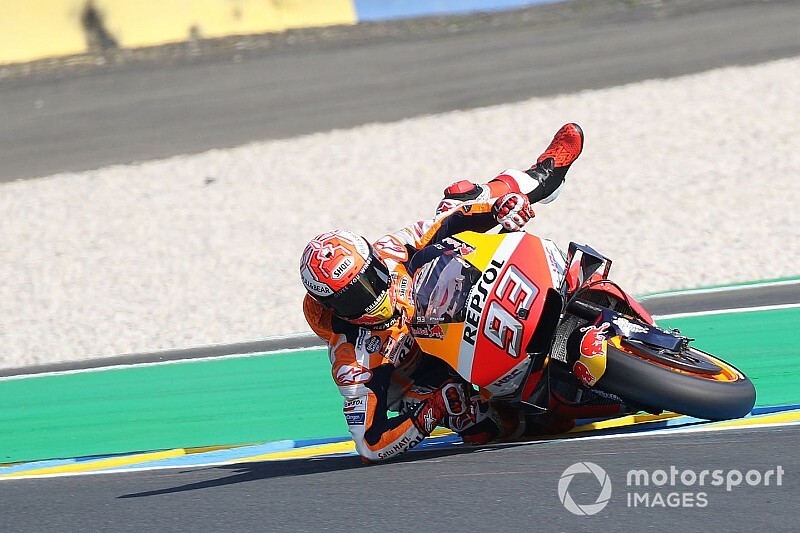 Marquez has emerged as the early favourite for the 2019 premier-class riders' title, and leads the standings after winning three of the first five races.

Miller battled with Marquez for the lead in the early stages of the recent French Grand Prix, and said he was impressed by the Spaniard's ability to minimise the laptime he loses to minor errors.

“He doesn't really make many mistakes and even when he does he's still able to make it look pretty quick,” Miller said.

“A couple of times into [Turn] 8 I thought he was going to touch the kerb and have a little moment, but he was able to stop, pull it back without losing maybe even half a tenth. His, let's say, mistake management is quite well.

“He's very strong at the moment. That package is working really well with him on it. Hopefully at Mugello we'll be able to find something out of the bag.”

Marquez has enjoyed by far the strongest start to the 2019 season of the three riders on current-spec Honda bikes, with works teammate Jorge Lorenzo yet to get to grips with the RC213V and LCR's Cal Crutchlow less comfortable on the '19 bike than he had been on its predecessor.

Crutchlow conceded Marquez is “making the difference” with the Honda right now, and described the Spaniard's aggressive, elbows-out riding style as “completely unbelievable”.

“Marc's Marc. I can see on the data how he does it, but nobody else can do it, it's as simple as that,” Crutchlow said.

“I think he's doing a great job with the package he's got, and at the moment he's unbeatable.”

Crutchlow added he also had “no idea” how Marquez manages to repeatedly prevent likely crashes after losing control of the bike.

“He does lose it, he just saves it - he loses it way more than me. He shoves himself into the ground and then picks it back up.

“In five years on a Honda I've never done that in my life. I don't really think anybody else has either. I remember seeing [ex Marc-VDS rider Tom] Luthi do it once, but I'm sure it was pure luck.”

Ducati: "No sense" to move Bautista away from WSBK