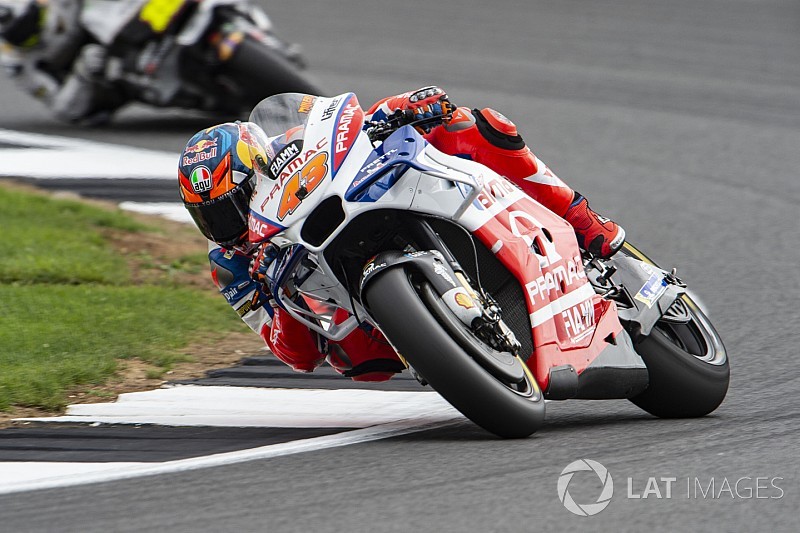 Jack Miller says he is "900 percent" sure that his gamble on slicks during a drying MotoGP qualifying session at Silverstone would have resulted in pole position if he had time for one more lap.

Rain fell on track during FP4 immediately before qualifying and, despite delays before both Q1 and Q2 due to the accident involving Tito Rabat, all riders started the pole position session on wets.

Miller switched to slicks after his first run, but ended the session ninth, only beating Alex Rins and the Yamaha duo of Maverick Vinales and Valentino Rossi, narrowly failing to improve on his best time set on wets.

However, Miller was certain that track conditions would have been good enough for him to take pole if he had time for one more lap on dry tyres.

He said: "One more lap and I would have had the pole position, I guarantee. 900 percent."

Miller was fastest in the last sector of the track by nine tenths and had the best ideal laptime in qualifying by over a second, but the Australian explained how tackling the Abbey and Farm corners cost him pole.

"Even on my best lap, sector three my partial [time] was my best but was quite bad," he recalled. "The tyre was still wet on the left side and as I changed directions from the right to the left from [Turn] 11 to 12, front end went.

"I had to close the gas and sort of stab the knee and pick it up and lost a lot of time there because of that."

When asked if he was surprised that nobody else gambled on slicks, Miller said: "No. They never do, they are all scared."

Miller admits he has been going through a "low point" in his career lately, but has enjoyed a strong Silverstone weekend so far, as he was in the top six in all four practices of the weekend.

"We've been strong all weekend but really happy with the performance this weekend, really turned things around," he said.

"Hard to say what's caused it, I think it's my mindset more than anything else, is just in the right place. I wish I could tell you [how I did it], and I'd do it every weekend."