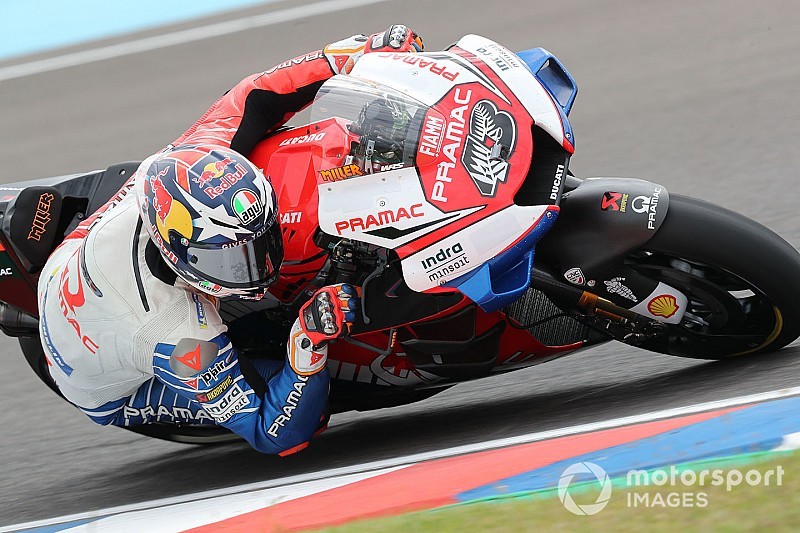 Jack Miller says he feels like he has a 'gun for a gun fight' now he's on Ducati's GP19 MotoGP bike.

The Aussie is on a current-spec bike for the first time since joining Pramac, having jumped straight from the GP17 to the GP19 for his second season as a Ducati rider.

His results have been mixed since making the switch, his season opener in Qatar ruined by a bizarre seat issue, before he recovered with a fourth place in Argentina.

However he reckons on both occasions he felt better equipped to run at the front of the MotoGP field.

"I said to someone that I feel like I'm bringing a gun to a gun fight now, and that's the best way of explaining it. The speed is easier to come by and you don't feel you’re riding it right on the ragged edge every corner just to get a lap time out.

"That's why Qatar was frustrating; with the way [Andrea Dovizioso] rode that race and controlled the pace, I reckon I could have stayed with the front group and been in a position to do something in the last few laps.

"In the first few laps on this bike is when I notice it, you're not constantly over-braking and cooking the front tyre just to stay with those guys, and not trying to make up for not being able to stay with them on the straights.

"I can manage the tyres better because the speed of the bike is there, that's probably the biggest factor."

Tyres still played a pivotal role in Miller's Argentine GP, a decision to run the medium compound front, rather than the hard, potentially costing him a podium finish.

Speaking after the race he said: "It was my decision, I felt better on the medium. But with the heat we had we probably would have been better on the hard.

"Since the third lap I was pushing the front. As the tyre got worn down on the rear I was able to control the front a little bit more, and it helped me make some moves towards the end of the race.

"Maybe, my strategy could have been a little better. I got into some tussles with [Franco] Morbidelli and stuff like that when I should have just maybe just let them burn themselves out and waited, rather than trying to fight them.

"I learnt a little bit today.

"We were probably lacking a little race experience, but from what I learnt today I feel can help us improve and make that last little step to fighting with [Valentino Rossi] and 'Dovi' for the podium."

Dovizioso was "scared to crash" in last-lap Rossi fight