Pramac Ducati rider Jack Miller has expressed his frustration with how long it took MotoGP race direction to stop the wet race in Valencia, the Aussie labelling the situation “a joke”.

Miller was among the 11 riders to hit the ground in the first part of the season finale, with the rate of crashes picking up as track conditions worsened, before the race was suspended after 14 laps.

The Aussie was one of the first to fall, and grew increasingly incensed in the pitlane as more and more riders crashed.

“I mean, it was a joke, they should've stopped the race a long time before,” Miller said afterwards. "I'm not giving myself an excuse or anything, but for example for Maverick [Vinales] to crash almost in a straight line...

“It's not normal, the amount of water [that] was coming down.”

Miller felt riders' wishes expressed in the Friday safety commission meeting had been ignored, after some of his fellow competitors relayed their concerns over the track conditions in practice.

He said the track in the race was "for sure" worse than on Friday, adding that the red flags should've come out "a good five laps earlier".

The Aussie suggested that race direction was instead trying to get the grand prix to three-quarters of the planned race distance, as this was what the regulations required for the event's results to be declared official in case of an early stoppage.

“We pushed a lot on Friday in safety commission, because on Friday we had the two red flags, we said 'hey, if it gets bad, put the red flag out'.

“And for me was like they were trying to make three-quarters race distance.”

Speaking about his own crash, Miller said: “It was a little unlucky, just hit my normal line through Turn 3 and same sort of throttle, everything, just caught a puddle or whatever and aquaplaned and looped out.

“As we all did, every single one of us, I don't think there was one crash on the front end, everybody looped out from aquaplaning on the rear.”

Miller's Pramac teammate Danilo Petrucci was among those caught out by the worsening conditions, crashing out of fifth place.

Petrucci, who leaves the Italian team after four years to join the works Ducati outfit, was disheartened to finish his Pramac tenure in this way.

“Unfortunately I crash in the moment when the rain was heavier, and together with a lot of riders,” he said. “I feel very, very sorry for the team, I did only one mistake in this weekend but in the race and unfortunately we couldn't finish the race.

“Tuesday [in testing] we begin another season and I'm looking forward to it.

"I feel very sorry again for the team, but I think I did a good job in these four years and I would like to thank anyone from Pramac Racing and all the people that helped me.” 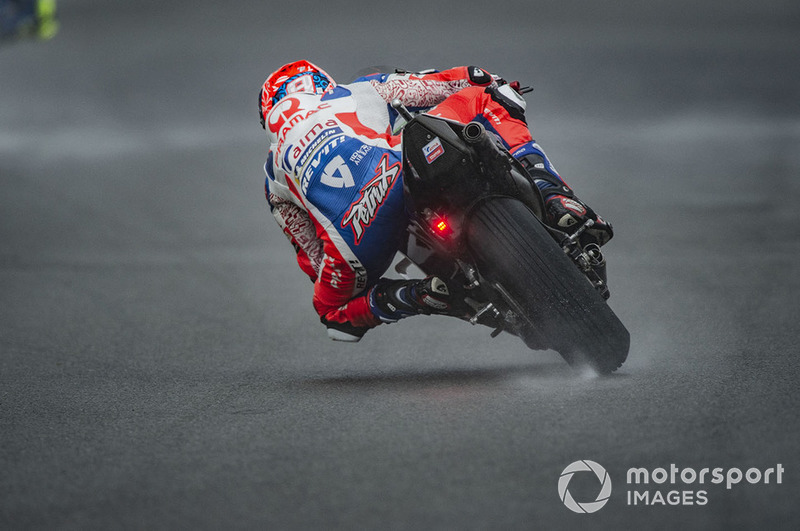